Albert Brooks is Lost in America

"Out on the road today I saw a Deadhead sticker on a Cadillac ..."

To the casual, mainstream film-goer, the name Albert Brooks probably doesn't mean a lot. If they recognize the name at all, odds are they're remembering him as a role player in such films as Broadcast News or Private Benjamin. Odds are they won't identify him as a comic genius, or a skilled writer, director, and star of some of the best comedies of the past forty years. But Brooks is all of these things, and more.

Brooks grew up in Hollywood.  His father was a radio comedian who died when Brooks was quite young, but not before naming his son Albert Einstein. With a name like Albert Einstein, he had to be smart and funny. As a teenager, he became close friends with Rob Reiner and Richard Dreyfuss. Before he changed his name to Brooks, Reiner's father, Carl Reiner, told Johnny Carson that the funniest person in the world was a kid named Albert Einstein.

Brooks started as a young stand-up comic in the late '60s. At the time, most stand-up comedians were of the Shecky Green/Buddy Hackett variety, opening up for Sinatra type singers and telling ex-wife jokes that conformed to a predictable set-up/punch line rhythm. Brooks was one of the first comedians to play against the standard joke/punch line format. His humor was conceptual and self-aware; he used the stereotypical show business archetypes and turned them on their head. He was intelligent, and assumed his audience was intelligent enough to understand the quiet iconoclasm at the root of his humor.


The first time I saw Brooks, I was eleven or twelve years old. It was on "The Flip Wilson Show" (anybody else remember Flip Wilson?) when he came on to do his ventriloquist routine. The only thing was, Brooks played his part as being so unskilled, nervous and inept so well that it was beyond belief. There wasn't a punchline to be found, yet it was one of the funniest things I'd ever seen, even though I had trouble explaining why it was so funny. He took all of the conventions of the ventriloquist routines, and, knowing that his audience was as familiar with them as he was, he found an angle to exploit: what if the ventriloquist not only had no skill, but was incredibly nervous? It was exactly the type of conceptual routine that Andy Kaufman would make famous several years later.

It was about this time that Brooks became a frequent guest on the Johnny Carson show. One night I was watching when he came out, sat in a chair, seemingly depressed, and openly confessed that he was out of material. He then proceeded to do the things he could do that just weren't him, including dropping his pants, smashing a pie in his face, spraying himself with seltzer water, all the while proclaiming "This isn't me."  You could feel the audience going exactly where he wanted it to go. A couple of years later, Steve Martin would achieve super stardom with his "wild and crazy"guy routine, with an arrow in his head and balloons and not a punch line to be found.


A direct line can be traced from Brooks to Kaufman and Martin. They had in common conceptual humor and intelligence (even when doing stupid things - they trusted the audience enough to recognize and laugh at the stupidity) and a desire to break through the wall between performer and audience.

Brooks went to Hollywood, making six short films in 1975 for the first year of Saturday Night Live. He had a supporting part in Martin Scorsese's masterpiece, Taxi Driver, and in 1979, wrote, directed, and starred in his first feature film, Real Life.

Real Life again shows Brooks ahead of his time. The premise, to follow around a typical American family with a camera, foresaw the recent reality television craze. The film, like most of Brooks' projects, was self aware, with Brooks playing the part of the director, a guy named Albert Brooks, who just so happens to share all of the comic sensibilities and traits of the real Albert Brooks (or at least of the comic persona he'd developed), including his neurosis, his con-man desperation, and his need to manipulate and control. And, of course, just like his ventriloquist act, things go horribly and hysterically bad, culminating in a last ditch attempt to to inject some drama and save the movie, with Brooks setting fire to the family's home.

His second film, 1981's Modern Romance, is a more conventionally told tale of a neurotic Hollywood film editor (Brooks) trying to navigate the obstacle course of love. Again, Brooks can't resist gentle inside nudges at show business, as we get to see him at work, editing a comically low budget sci-fi film. But most of the humor is gentler and more subtle than in Real Life. Like Real Life, Modern Romance was moderately successful; both films drawing a small but devoted audience, both films efficiently made and revealing a rare intelligence. Brooks' apprenticeship as a comedian and filmmaker was over. He was, artistically ready for the big time, even if his work was too subtle and layered for mass consumption.

His next film, 1985's Lost in America, was the breakthrough, the work where he realized his potential. Released smack dab in the middle of the Reagan decade, it captures the essence, the conflicted soul of the country that emerged from the rubble of the civil rights movement, the Vietnam War, Watergate, inflation and recession. It's about the transformation of baby boomers from Hippie to Yuppie. If anyone wants to understand what the '80s was like, Lost in America is a pretty damned good place to start.

The film opens with Brooks playing David Howard, an upwardly mobile executive in a Los Angeles advertising firm who doesn't get the promotion he thought he was promised and is instead asked to relocate to the firm's New York office. Enraged, Brooks loses it, and gets himself fired.

Brooks then decides to shuck it all in. He convinces his wife (Julie Hagerty), a manager at a department store, to quit her job, and the two of them will drop out of society and take to the road just like Peter Fonda and Dennis Hopper do in Howard's favorite film, Easy Rider. On the road, they aim to find America. The fact that the Howards, unlike Fonda and Hopper, take to the road in an enormous Winnebago RV, and that they have a "nest egg" of over one hundred thousand dollars to fall back on, doesn't seem to register with Brooks. It's the '80s, and the '60s still cast a long and romantic shadow on the upwardly mobile and ambitious beings that the hippies had become.

Things take a disastrous turn for the worse when, on their first night "on the road," they stop in a Las Vegas casino. (Spolier alert  --> ) Let's just say that while Brooks is sleeping in their hotel room, Hagerty (in a very funny scene that reveals what a gifted comedienne she is) has a bit of a losing streak at the roulette table, emptying the nest egg.


Without the nest egg to fall back on, Brooks is suddenly terrified. In one of the funniest scenes, using the nervous con man/salesman persona we were already familiar with from previous films and acts, he meets with the owner of the casino (played by Garry Marshall) and attempts to talk him into giving the nest egg back.

Without the nest egg, they get as far as Hoover Dam before they discover the real America isn't the romantic vision of Kerouac or Easy Rider; rather, it's a place populated by trailer parks and menial service-level jobs. They've found America, and can't wait to get out of it and return to their roles in Yuppieland. 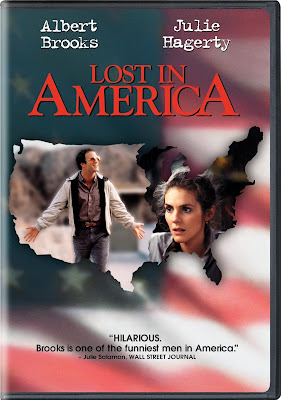 Lost in America works as a biting satire of the shallowness of the time, and as social commentary on how the baby boomer activists of the '60s became the materialistic capitalists of the '80s. It's Brooks' growth as an artist in that he is able to recognize the same traits in his comic persona were shared by his generation, and instead of turning inward and mining these traits for laughs, he looked his audience, his generation, in the face and saw the same insecurities and contradictions. There are plenty of laughs in Lost in America, but with Brooks' usual soft and gentle touch, there is room also for sad recognition of the truths he's uncovered.

Brooks has continued to make funny and intelligent films (like his follow up to Lost In America, 1991's brilliant and hilarious Defending Your Life), never achieving the super stardom that always seemed within his reach but that he doesn't seem interested in, and that is just fine. Those of us who are familiar with his work recognize the world as a funnier and more nuanced place for it.