Have you ever heard a song so good that you ended up playing it over and over on an endless loop? That's how I'd describe my experience with actor/director Jon Favreau's film Chef. I watched it on Netflix on a late Friday night and then again the following morning. When I watched it a third time a couple weeks later, it just made me want to watch it a fourth and fifth and sixth time. Honestly, I don't think I could ever get sick of it. Favreau combines great actors, a fun soundtrack, colorful visuals, and a spot on script. 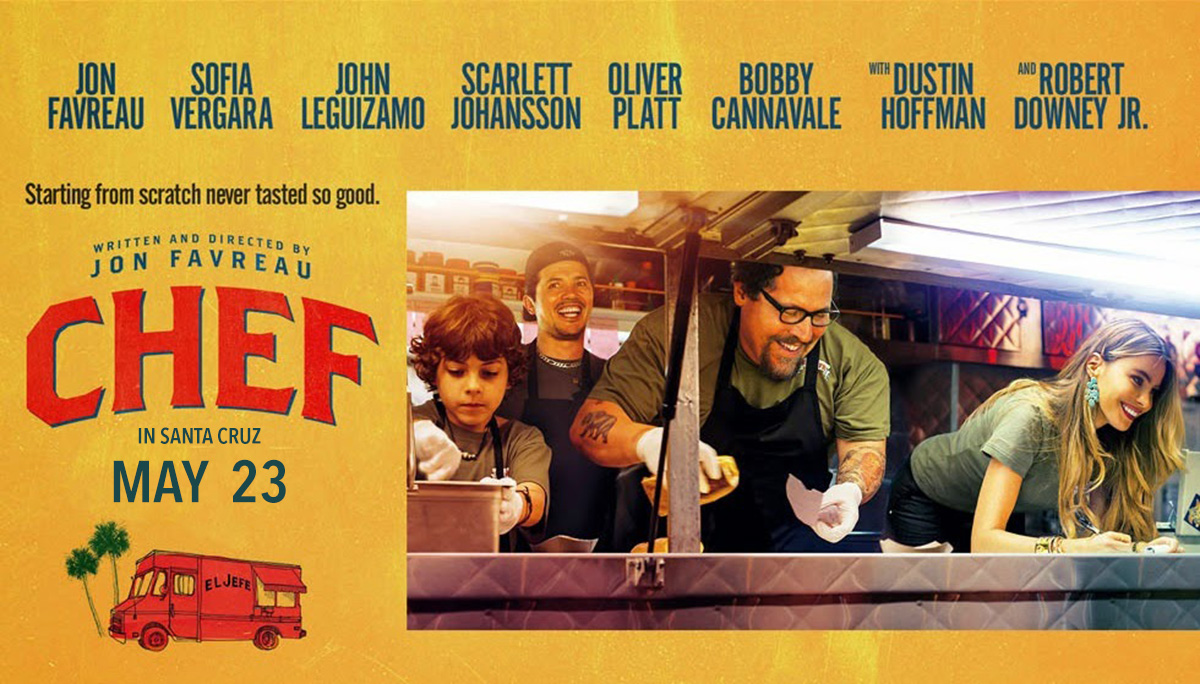 The film is packed with A-list actors who are all on their A-game. The always entertaining Favreau put together a solid cast who all put their best foot forward, most notably Jon Leguizamo, Sofia Vergara, and Oliver Platt. Even Dustin Hoffman and Amy Sedaris make the most of their limited screen time. And of course there's Favreau, who went above and beyond to prepare for his role. He trained with food truck chef Roy Choi who sent Favreau for a week of intensive French culinary schooling.

Favreau, who directed the first and second Iron Man films, also gets some help from a couple of his Marvel actors: Robert Downey, Jr. and Scarlett Johansson, both of whom provide nice scenes. Johansson shares a cute "sex" scene with Favreau, but don't take that literally (it's about the food). And Downey, Jr. creates an awkward, yet meaningful, scene later in the film. But most surprising is Favreau's onscreen son, played by Emjay Anthony. Anthony not only holds his own against the charm of Leguizamo and Favreau's likability, but his low-key performance could easily place him on a best supporting actor list. I see good things for him.

Besides the film boasting all of these charismatic actors, it's Favreau's screenwriting that ultimately wins me over. It's not just a story about a chef having a falling out with the restaurant owner; I'd say it's more about a father and son trying to patch up their relationship. And it's what Favreau does with the story that makes it worth multiple viewings. In fact, the film's structure is so original that it actually threw me off. Most films follow a story pattern that make it easy for audiences to know where they are in the story. Without trying to go into a Screenplay 101 course, I'll just state that there's usually a moment in the later part of a film (the beginning of the third act) that gives the protagonist his biggest challenge, and usually when he's at his absolute lowest. This is referred to as Plot Point 2. Chef somehow avoids this. And even if it's technically there, it's not as dramatic as most films. And I couldn't be more happy about that.

From the first few seconds of the film, I was totally on board for the ride. It was so entertaining that I didn't want it to get off course. I kept dreading that impending third act, but then I realized that we'd gone well past the point of no return. By the time the credits started rolling I actually had a grin on my face because it never happened. Not only was it not needed, but it would have ruined a perfectly good ride. There were enough obstacles throughout the film that adding a dramatic third act wouldn't have added anything useful.

Changing that structure was like taking away a boring foundation that I had been standing on for decades. It's as if Favreau had played enough with his previous films to learn how to make a brand new recipe. I think Favreau's a confident enough writer to know how to tell a story in his own way. If you study his earlier films like Swingers or Made, both of which he wrote, it becomes apparent that Favreau is an actor's director. He knows the importance of dialogue, performance, and the skill of storytelling. And when you look at Iron Man, it's obvious that Marvel picked the best director to start off the Avengers films. He doesn't do things the ordinary way; he does what's right for the story. 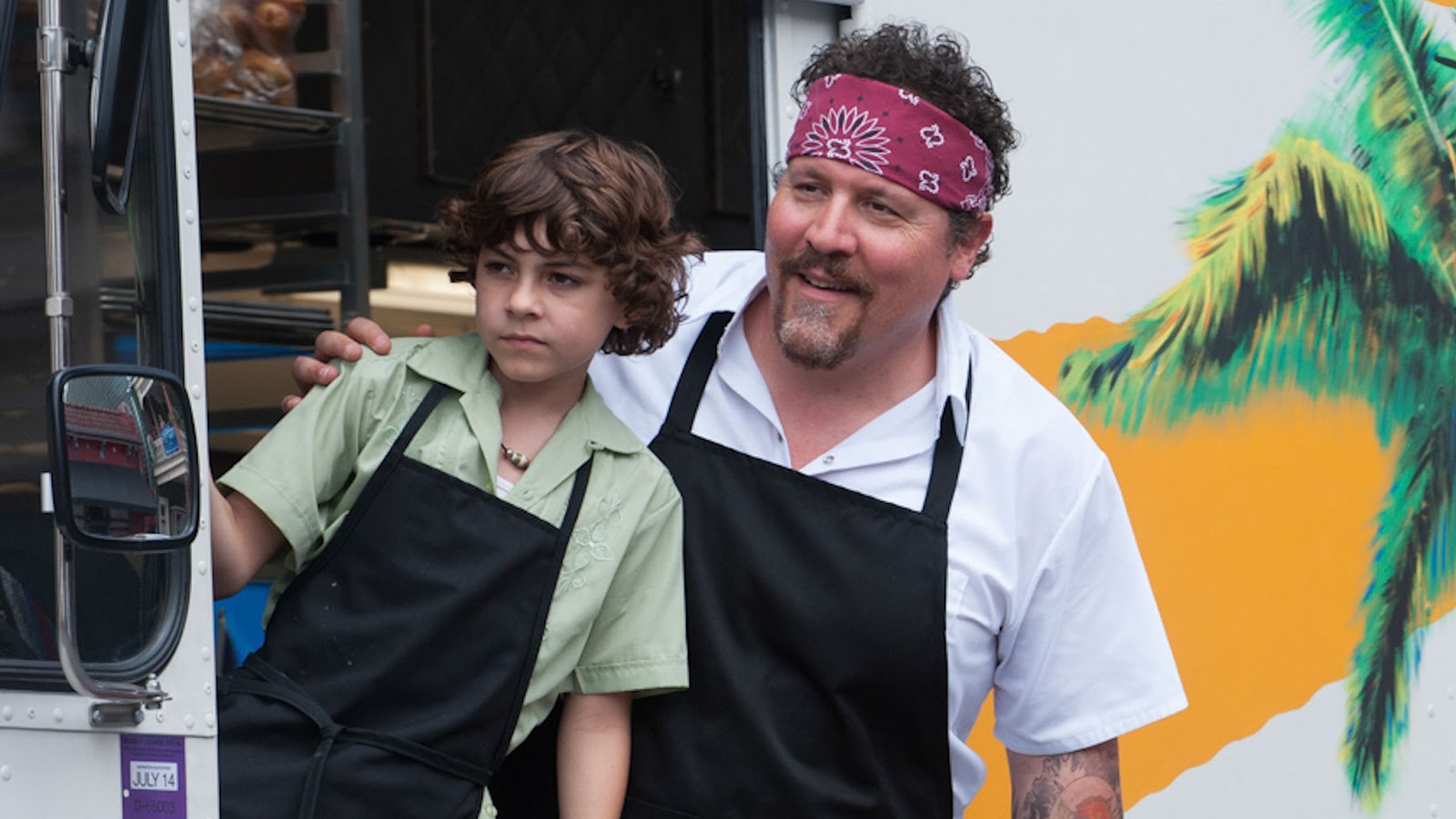 Chef really does stand out among other films, especially those released in the same timeframe. There's no major stunts or actions sequences. There's no over-dramatic, Oscar Award-baiting performances. There's no mind-blowing twist at the end. It's just a great movie about a character recovering from a meltdown. And that's the kind of story I can relate to, and watch over and over. Oh and one last note; you may not want to watch this film on an empty stomach. It will make you hungry.

TRIVIA: Besides getting Robert Downey, Jr. and Scarlett Johansson to act in the film, there's another nod to Favreau's Iron Man films. During a scene in a movie theatre with his onscreen son, Percy (Emjay Anthony), a sound effect of Iron Man's repulsor charging up can be heard.