Having the ability to stream TV shows online can be a beautiful yet dangerous thing. I wasn’t a big TV watcher in the past, but now, having the convenience of online streaming services and more networks who offer full episodes of their shows online, I’m on the slippery slope of becoming a TV series junkie.

I’m sure that I could write full-length articles on any of these, and, who knows; I just might do that in the future. But since some of these shows are still on-air, giving you the chance to jump in and start catching new episodes, I’m going to offer up a short list of series that I’ve settled in with for some serious marathon viewing.

After binge-watching (and enjoying) every season of The Tudors, I wasn’t sure if another monarchy-based period drama would hold up for me. I didn't need to worry--the first few minutes of the pilot episode of Reign are intense, which pulled me in right away, and the show has enough differences that I don’t feel like it’s a Tudors reboot. Following Mary, Queen of Scots (played by Adelaide Kane), as she arrives at French court as a teenager in the mid-1500s, she's betrothed and eventually married to the Dauphin of France, Francis (Toby Regbo). The show is a whirlwind of political intrigue, sex and romance, murder, betrayal, and determination. 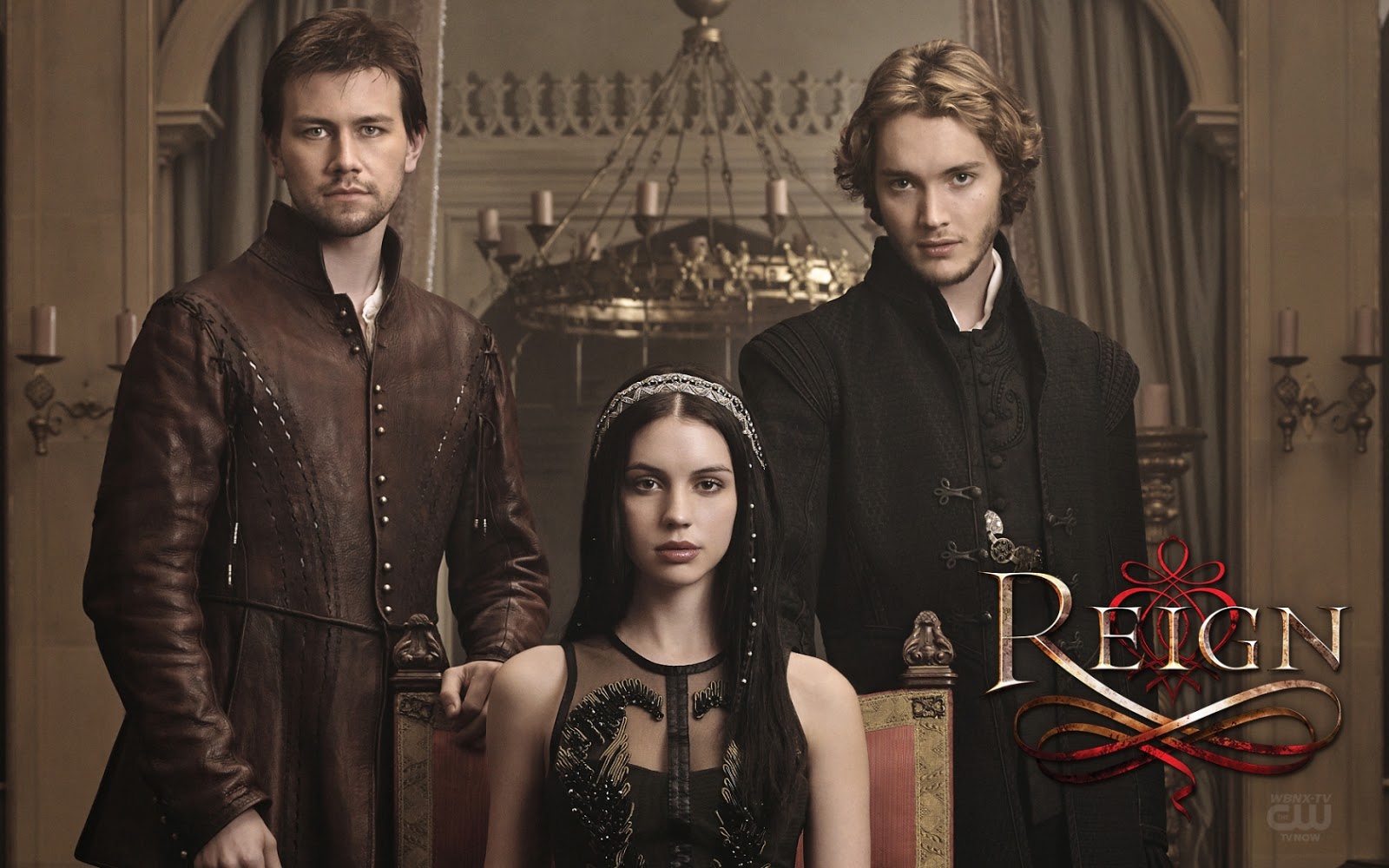 Kane and Regbo do a good job of portraying royals who come to power at a young age, and the extreme pressure and occasional confusion that must have come with that. I have no doubt that Reign takes liberties with a lot of its historical details, but watching Mary and Francis try to rule and make good decisions for both of their countries while so many around them try to influence and manipulate them, you can’t help but imagine that this truly might have been what the real monarchs were up against.

And it’s not just the two main royals who handle their roles so well. I have an ongoing love/hate relationship with Catherine (Megan Follows), the Queen of France at the time Mary arrives at court. Just when I think I can’t dislike her any more, something will happen or be revealed that makes me reconsider and feel some sympathy.

In the US, you can find new episodes of Reign on The CW every Thursday. Catching up on past seasons, though, is a little tricky; Netflix carries only season 1, and Hulu only carries a select number of episodes from season 2.

I have to admit that halfway through the first episode of Copper, I was on the fence about this show. Gritty, sometimes violent, and touching on some highly-charged emotional issues, the BBC America program is set in the former "slum" neighborhood of Five Points in New York in the 1860s, and follows Irish immigrant Detective Kevin Corcoran (played by Tom Weston-Jones). As the series opens, Corcoran is struggling to adjust to his life and his job after returning from fighting in the Civil War, only to find that his young daughter has died and his wife is missing.

After the credits rolled on that first episode, I was invested in the story enough to keep pressing “play” on each episode after that. One of the things I like so much about it is that the characters are layered and complex. You can’t help but anguish with Corcoran as he tries to find out the truth about what happened to his daughter and wife, and admire him when he comes to the aid of Annie (Kiara Glasco), an orphan girl who’s been sexually abused. But even with his noble traits, in every episode we see how he’s flawed too, and how many tough choices he has to make. The same can be said of Corcoran’s friend, Matthew (Ato Essandoh), a doctor who’s a former slave and helps him with police cases, and his wife, Sara (Tessa Thompson), who still deals with trauma from her past. All of these characters are interesting, multi-dimensional, and well-played.

After blazing through the first two seasons of Copper, I was looking forward to new episodes appearing on Netflix. Getting impatient, I did an internet search to find out about the current season--only to read that the show had been cancelled. Like other fans, I’m not happy with this news. My visit to Five Points has been cut short, and the characters that I came to know and love didn’t even get to say goodbye. If I can take solace in anything, it’s that I can always re-watch the series, even if the excitement and anticipation of new episodes has been taken away. You can find both seasons of Copper on Netflix and Hulu.

Vikings piqued my interest early on, when I was browsing around on the History Channel’s website and saw it being promoted. At first, I was busy binging on other shows, so I just tucked away the thought of it. When I finally came back to it recently, I tore through episodes at lightning speed—mostly because I was so enamored with it, but as a bonus, it’s early in its third season, so there wasn’t as much to catch up on.

Launched in 2013, Vikings’ primary focus is the Scandinavian town of Kattegat and its people, especially Ragnar Lothbrok (played by actor Travis Fimmel), his family, and fellow warriors and friends as Ragnar rises to power in the Viking world.

Vikings has just as many—if not more—violent, bloody scenes as Copper, especially since there are battles galore. But once again, I was hooked by multi-faceted characters who are flawed yet often well-meaning. I like that there are quite a few strong female characters on the show, and Lagertha (Katheryn Winnick) is one of my favorites. A shield maiden who fights alongside the men during raids, she has courage and conviction, even as she rises to greater status.

Some have criticized the show for historical inaccuracies when it comes to Viking life and customs, and I can’t really argue. I don’t know much about Viking history, but I’ve caught phrases or other nuances that don't seem to fit with that time period. Still, this is a TV show, meant as entertainment. If you just indulge your imagination, you'll enjoy all of the things that the show does right, including its great sets, scenery, and the women’s elaborate braids/hair styles. (I’m only half joking here; check them out—they’re incredible.)

You can catch up on the seasons on Hulu, and can watch the most recent episodes by going to www.history.com/shows/vikings.

I hate to say it, but I almost gave up on Bomb Girls after watching the first episode. I love history, and the World War II time period is no exception (especially since my grandfather was an American veteran), but Bomb Girls didn’t immediately hook me like some other shows have. It enticed me enough to want to give it a chance, though—and I'm glad that I did.

Set in Canada, it’s the story of a group of young women who work in a munitions factory during WWII, and the floor matron, Lorna (Meg Tilley), who supervises and befriends them. Gladys (Jodi Balfour) comes from a very wealthy family but is determined to be hands-on in helping the war effort; Kate (Charlotte Hegele) has run away from her abusive street preacher father; Betty (Ali Liebert) is struggling with her sexuality and its nonacceptance during that era, and Vera (Anastasia Phillips) fights to regain her self-esteem and identity after she’s involved in an accident at the factory.

Dramatic sub-plots involving each of the women’s lives have a way of coming back together and interweaving into the larger plot, and even with some almost over-the-top storylines (one of the women gets caught up in espionage at one point), there’s enough that’s relatable that you get invested in the characters and the everyday problems they deal with. There’s also plenty of social commentary, but most of it is done in a way that viewers aren’t bashed over the head with it.

Bomb Girls suffered a similar fate as Copper, and was cancelled after just two seasons. A two hour TV movie/series finale aired last year that brought some closure to some of the storylines, but I’m sure that I’m not the only fan who feels like the show was wrapped up too soon.

You can find both seasons of Bomb Girls on Netflix, as well as the TV movie, which they oddly list as “season 3.”

Like Vikings, Sleepy Hollow is a show whose hype preceded it; some of these television marketing execs really know what they’re doing. I started watching this series as soon as it premiered, and have been glued to the screen when I’ve fallen behind on episodes a few times and needed a quick watching marathon to catch up. Now, I’m impatiently waiting for new episodes.

Loosely based on Washington Irving’s short story of the same name, Ichabod Crane (Tom Mison), is suddenly thrown into the present day and crosses paths with Police Lieutenant Abbie Mills (Nicole Beharie) after he rises from his grave 230 years after his death. It’s soon revealed that Ichabod and Abbie are connected by being the two “witnesses” who can possibly stop the Apocalypse and other evil threatening mankind.

Sleepy Hollow is an interesting mix: part supernatural thriller, part buddy comedy, with plenty of drama and action thrown in, it’s this mish-mash of genres that makes it work so well for me. Besides the chemistry of the friendship between Abbie and Ichabod, one of my absolute favorite elements of the show is Ichabod’s confusion with modern day advancements (cell phones, modern clothing, etc.). His efforts to adjust to living in the present produce some of the funniest snarky comments I’ve heard since Gilmore Girls.

Though a lot of emphasis is on the “witnesses” and their struggles to fight evil, the rest of the cast give great performances too, as characters who work with or against Ichabod and Abbie (some characters even do both, switching sides partway through). Not all of these characters are just “regular people” either; some “Founding Fathers” of the United States and other historical characters make appearances, with Ichabod sometimes giving hilarious insight into their personalities and personal lives. The show takes liberties with some historical events in American history too, offering up wild, fun possible explanations through Ichabod Crane’s memories of Colonial/Revolutionary War times.

There are other series that could’ve made this list, but when I was trying to decide which ones to highlight for this article, I realized that a few of these have ties to each other. On Reign, I thought I was seeing a familiar face when Bash (Sebastian), Francis’ half-brother played by Torrance Coombs, appeared onscreen. And I was right; Coombs was on The Tudors as well, as Thomas Culpepper. Déjà vu kicked in again watching Vikings, when I swore I’d seen Lagertha before. Turns out, Katheryn Winnick also played Hannah, another head-strong, independent lady, on Bones. (I like this seeming trend with her roles.) That wasn’t the only case of “Hey—I know you…” though. King Horik on Vikings (actor Donal Logue) was also police General Brendan Donovan on Copper.


So, what about you, readers? What are some of the TV series that you find yourself binge-watching?