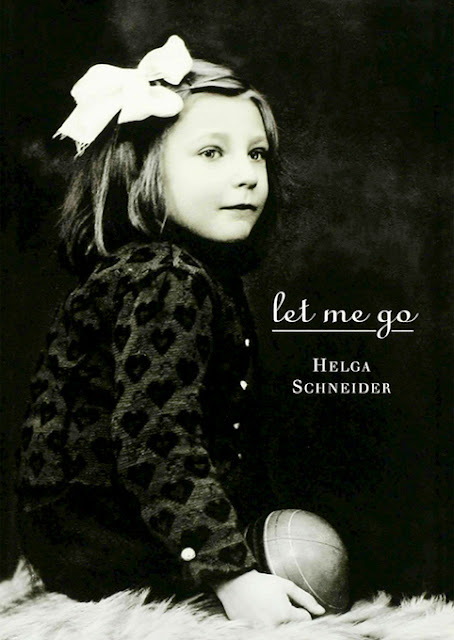 In 1941, Helga Schneider’s mother said goodbye to her and walked away, leaving both the little girl and her younger brother in a relative‘s care, apparently never looking back.  Helga’s first reunion with her mother wouldn’t happen until nearly thirty years later.  Her mother’s reason for leaving her children and her former life behind? To serve as a high-ranking member of Hitler’s SS, working in some of the most notorious concentration camps in Europe: Auschwitz, Birkenau and Ravensbruck.

Let Me Go is a riveting memoir by Schneider, detailing her second, and last, visit with her mother.  By this time, her mother was in her late eighties and in declining health, suffering from dementia or other memory impairments.  However, she has stunning, chilling clarity when recalling her days as an SS guard.  Written in a style that combines the story of that visit with childhood memories and stream of consciousness questions towards her mother, readers get pulled into Schneider’s struggle.  How can she find some sort of peace with the past: both her own and her mother’s, tied together with a tenuous thread of shared DNA and a sense of obligation?

Having studied WWII-era history in college, I knew some of the vile details of the Nazi regime and had seen some of the wrenching footage of the skeletal bodies piled up as the Allies came in to liberate the death camps.  But in the book, as Schneider delves deeper into her conversation with her mother, more terrible information is revealed.  It leaves her---and the reader---with yet more questions.  How could people commit such atrocities against other people, day after day? And how could her mother seemingly “forget” her children, living with luxuries like champagne and silk stockings, while they nearly starved, and hundreds of people were being put to death just yards away from where her mother was sleeping at night? It’s a maze that Schneider can’t seem to get free of; as she asks more and more questions of her mother, hoping to finally get some answers that will help her to make some sense of the past, she finds that some things don‘t change, despite the passage of so much time.

While reading Let Me Go, my heart couldn’t help but ache for Schneider, who’s so completely torn.  On one hand, she doesn’t feel a real sense of love for her mother, and during this last visit chronicled in the book, as her mother tries to grab her hands, hug and kiss her, and asks her to call her “Mutti” (an affectionate diminutive of the German word for mother), Schneider is physically repelled by the gestures.  In fact, the physical reactions experienced by Schneider are vivid and prevalent throughout the book.  She’s on the verge of panic and feels ill as she prepares to go to the Seniorenheim (senior nursing home) where her mother resides. And while she’s there talking to her, many of the same negative gut reactions keep happening.  Still, she’s pressed on by wanting answers, by wanting to know the truth of what happened and what her mother was possibly thinking and feeling during all of that time.  Alternating between an urge to just flee and get back to the safety of her own life and an urge to keep pushing for her mother to make the revelations, as a reader, I could feel the tenseness in my own body at times.  I, too, wanted Schneider to fight the unease she was feeling and keep going.  Like her, question upon question was bubbling up, and a desire to try to grasp some sort of understanding of how a person could do the things she’d done, and how one could so completely rationalize and justify them.  Like her daughter, I wanted even just a hint of reassurance that with the threat of her own death (had she been suspected of disloyalty to the Fuhrer) far behind her, that she feels deep regret and remorse.

In one of the more powerful flashbacks of the book, Schneider recalls how, during her first visit with her mother almost thirty years prior, her mother told her to hold out her hands, and then heaped gold jewelry into them.  “For a moment, I look uncomprehendingly at all that gold.  Then I understood, and it was if my hands were on fire.”  Her mother is offended when she refuses to accept the gold jewelry; jewelry that belonged to the former concentration camp prisoners, and Schneider is horrified as a particular piece stands out: a small,  delicate necklace that she’s sure must have belonged to a very young child who had been led to the gas chambers.

She also recounts a time from her childhood when she came face to face with Hitler himself, as a "guest" in his bunker.  She explains that, as part of a propaganda campaign in 1944, she and her brother went to the underground compound with hundreds of other children to receive food and medicine.  Not only that, but as he passed by the group, he shook hands with them.  Schneider's description of Hitler is one of the most unique that I've read, given through the perspective of a child's eyes.

Without revealing too much, I’ll just say that at the end of the book, we’re left, like Schneider, to take the revelations and try to comprehend them simply for what they are, and as ugly as some of them might be.  No easy answers are given, and no loose ends are really tied up neatly.

While this is definitely not an easy book to read, purely based on its subject matter and some of the details that it contains, it’s powerful, and I would argue, historically important.  More than that, it verges on a psychological study that grips the reader and stays with them, even after the last sentence is read and the book has been closed.

To read a brief biography of Helga Schneider's life and find out more about her other books, visit her website at: www.helgaschneider.com.

Posted by Anonymous at 8:09 PM