The Assassination of Jesse James by the Coward Robert Ford


Some films have the ability to twist a genre and create their own sub-genre.  Some do it by blending genres together (ex. Shaun of the Dead = comedy and horror), others do it by creating one (Lethal Weapon = buddy cop action).  Director Andrew Dominik and his film The Assassination of Jesse James by the Coward Robert Ford created a Western like no other.  And how he twisted the genre is a bit of a mystery.  It's definitely in the Western genre but something about it makes it stand out in its own class. 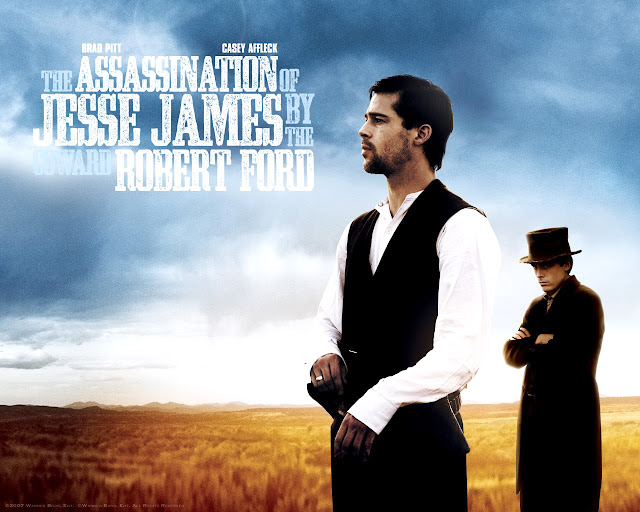 The Assassination of Jesse James by the Coward Robert Ford, released in 2007, starred Brad Pitt as Jesse James and Casey Affleck as Robert Ford.  Both performances are easily one of their best and have even been praised by the descendants of James.  The film has also been regarded as one the most historically accurate accounts of the James gang.

Along with Pitt and Affleck is a collection of the finest and underrated performers, including Sam Shepard as Frank James, Sam Rockwell as Charley Ford, Jeremy Renner as Wood Hite, Garret Dillahunt as Ed Miller, and Paul Schneider as Dick Liddil.  And the smaller "bit parts" feel giant in the hands of the cast's list of quality actors.  Mary Louise-Parker, Ted Levine, and Zooey Deschanel don't disappoint, but high praise belongs to the more unknown players such as Kailin See, Alison Elliott, Pat Healy, and a surprisingly great James Carville (yes that one).  It's almost eerie how amazing the cast gels with one another.  With no one trying to steal scenes, it's hard to find a moment when you're not taken back by the ensemble.


One of the film's best aspects is its slow but mesmerizing pace.  Editors Curtiss Clayton and Dylan Tichenor, along with their director, create something magical simply by allowing a scene to takes its time.  In fact, it comes close to what Sergio Leone did with Once Upon A Time In The West. It's Assassination's pace that helps bring the audience into the West where days weren't filled with technology.  Some movie-goers may have an issue with the film's slowness, and somewhat lack of action, but if the film was any different, its charm would surely dissipate.

The film is also brought to life with its use of narration (which was sadly omitted from the film's official trailer).  Actor Hugh Ross provides his calm, historic-like voice.  Much like Morgan Freeman before him, Ross has filled cinema's void in narration quality.  And again, the film would suffer from the removal (or worse, replacement) of his voice.  So many parts of this film were in perfect tune.

Hugh Ross, of course, was fortunate to have his voice placed underneath some of the most awe-inspiring imagery captured by one of cinemas finest directors of photography - Roger Deakins.  Deakins, who has won several awards and has been nominated countless times, has credits that include The Shawshank Redemption, O Brother, Where Art Thou?, and most recently Skyfall (the 2012 James Bond film).

Deakins takes a shot as simple as the shadow from a wooden chair and, with the help of Ross' narration, creates a menacing moment.  The same can be said about the entrance of a train in the night (during a train robbery scene).  The steam from its engine engulfs the black beast as it barrels towards the camera.  As the train reaches the camera lens, the front end of the train then pushes the camera, transforming the once stationary camera into a dolly backwards, carrying it through the dark woods. It's a shot tailor made for cinematography courses.

Deakins also utilized his self-penned "Deakinizers", which created a blurry haze on the edge of the camera lens (much like old-timey vignetting).  He explains that these "Deakinizers" were used to transition moments within the film.  The combination of his unique point of view and attention to meaning adds to the film's prestige.  Instead of just doing something 'cause it looks cool, Deakins uses his experience and visual style as a means to enhance, making him a true master of his profession.

With all these aspects in place, much of the film's credit also goes to its director - Andrew Dominik, whose previous film was seven years prior: 2000's Chopper starring Eric Bana (reviewed here).  Chopper was a far departure from Assassination which surely made Warner Bros. Studios sweat.  In fact, Dominik fought for many of the film's attributes.  And if it were not for the support of Producers Brad Pitt and Ridley Scott, Assassination may have been a completely different film.

But, Dominik stuck to his guns and his team backed him up.  Pitt, a fan of Chopper, probably took solace in the fact that Dominik successfully transformed a handsome gentleman like Eric Bana into a hideous criminal.  Dominik also made a story about said criminal into an entertaining story, set almost entirely within prison bars.  Pitt was justifiably confident with his director, which leaves no doubt why the two paired up again for the 2012 film Killing Them Softly.

Sadly, the film got little attention at the box office, but no matter.  So many films have been ignored by a majority of the general public and eventually found their audience (ex.: The Shawshank Redemption).  If it's not already being studied by film students, Assassination is soon to find Western fans who ache for quality content.

The film has also been criticized by some for not having a strong enough story, but to me, that's not the point of this film - I interpret it more as a mood filmed on celluloid; a mood of distrust stemming from Jesse James and bleeding into the other characters.  And there is indeed a story connecting all these characters, but the string that ties them together is Jesse James.  The moods of everything - from the characters to the landscapes - keeps you feeling uneasy from beginning to end.  And it's this feeling that makes you want to watch it over and over again.  Well…that combined with the brilliant team in front of and behind the camera. 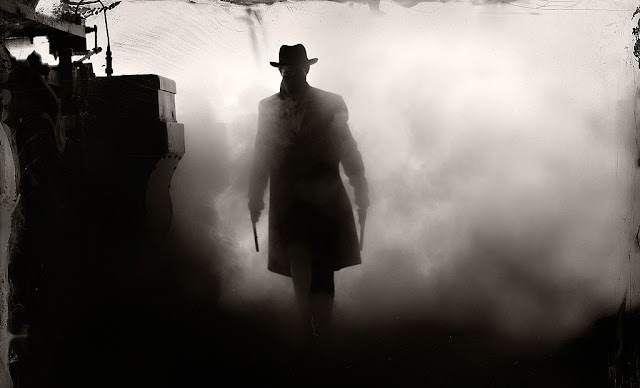 The Assassination of Jesse James by the Coward Robert Ford succeeds in so many ways - from the impossibly perfect cinematography, to the flawless cast, to the haunting score, to the documentary-like narration, to the art direction, to the sound design, to the slow and steady pace.  But it could have all been destroyed if not for the film's direction.  Andrew Dominik created a truly poignant film and is sure to be studied for years to come.

TRIVIA: Brad Pitt stipulated in his contract that the name of the movie was not to be changed.
Posted by Jav Rivera at 7:00 PM