By Jav Rivera
What's worse than getting fired?  Getting burned.  That's what happens to spies.  As the intro sequence to every episode explains, getting burned means you have nothing: no cash, no credit, no job history.  And unfortunately, that's what happened to Michael Weston in USA Network's "Burn Notice," one of the most clever spy shows around. 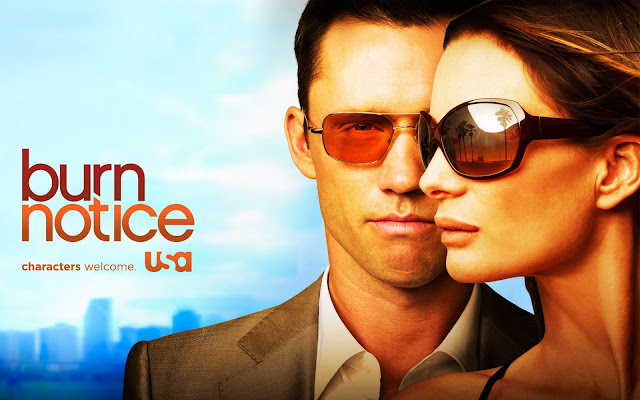 It began in 2007, when Creator Matt Nix's television series exposed the inside secrets of the US Government according to Special Ops-trained spy Michael Weston.  Each episode has dual story lines - one of Michael searching for the reason of his burn notice and another of him helping out a local Miami resident with a problem that only his skills can help resolve.

The main cast is in top form.  Michael Weston is the "cool" played by Jeffrey Donovan, trigger-happy Fiona is the "sexy" played by Gabrielle Anwar, Sam Axe is the "funny" played by Bruce Campbell and of course there's Michael's mom Madeline played by Sharon Gless (who might be best remembered for her role as Cagney in 1980s long-running television series "Cagney & Lacey").

The characters all have their purpose, both for the show and for each mission.  Even Michael's finely-tuned skills require help from Fiona's bold, armed and aggressive personality, as well as Sam's intelligence gathering and overall muscle.  But what makes the series unique is the focus on the help from Michael's estranged mother and occasionally his younger trouble-maker brother.  It's an odd gang but their oddities is what makes them perfect for each other.  Throw in a killer vintage Dodge Charger and you've got a show fun enough for anyone yet clever enough for the demanding viewer.

The episodes are narrated by Michael Weston explaining techniques on how to make high-end spy gadgets using every day products.  This too adds a bit of uniqueness to the series.  The narration also explains how the characters base their problem-solving on past missions and human behavior.  And when things don't go according to plan, they rely on their spontaneity-driven skills.

As clever as the episodes are with interesting missions, the series thrives on its characters and their relationships.  Each character brings something to the table both skillfully and emotionally.  It's rare these days for characters to have believable histories and emotions but fortunately, "Burn Notice" gets it right.  And even better are the characters' flaws from Michael's emotionally closed heart, Sam's Naval background, Fiona's taste for violence and Madeline's lack of motherly guidance.


"Burn Notice" also has an incredible sense of humor.  It's not a full on comedy nor a straight dramatical piece.  It has a great balance rarely achieved in most hour-long shows.  The drama and suspense is well played but never takes itself too seriously.  Even the love-hate relationship between Michael and Fiona is used sparingly.  Instead the show focuses on the closeness of the entire team and the importance of family.  It's a clever show with outstanding players.  The show returns this summer (2012) on USA Network so if you haven't already started watching the series, catch up on Netflix streaming.

And for no justifiable reason, here's yet another shot of the lovely Gabrielle Anwar.  What can I say?  I'm a sucker for brunettes.