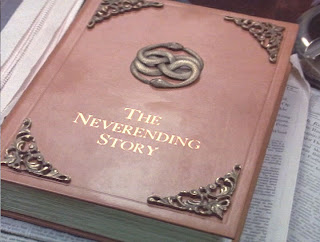 I was absolutely mesmerized by The NeverEnding Story as a little girl.  Directed by Wolfgang Petersen, the film was released in 1984 and starred a talented young cast: Noah Hathaway as Atreyu, Barret Oliver as Bastian, and Tami Stronach as the Empress. Shot largely in Germany during one of their hottest summers in decades, the story revolves mainly around these three characters.  Bastian is a young boy coping with his mom’s death.  On his way to school one day, he’s chased by bullies and ducks into a book shop, where he happens upon a book with a strange symbol on the cover. The shop owner warns him that it’s no ordinary book; unlike other stories where you leave the action as soon as you stop reading, this one is not as easy to walk away from.  With an incredible backstory like that, Bastian caves to temptation, of course, and “borrows” the book as soon as the shop keeper is distracted by a phone call.  Arriving at school after the first bell has rung, he goes up into the school’s delightfully creepy and cobwebby attic to take a look at the mysterious book.  As a storm starts to rage outside, Bastian becomes engrossed in the saga of Atreyu, a young warrior, and his struggle to defeat the Nothing, a mysterious force that’s destroying the land of Fantasia.  Atreyu is given the Auryn by the Empress of Fantasia; the same symbol on the front of the book Bastian is reading.  As Atreyu and his horse Artax journey through Fantasia, searching for the Nothing so that it can be stopped, Bastian realizes that the shop owner was right: this is one story that he’s become part of in more ways than one.

The NeverEnding Story is filled to bursting with captivating characters.  Near the beginning, Atreyu meets a group of Fantasia residents fleeing the Nothing, including the appropriately named Rockbiter, who has a taste for limestone.  Deep Roy (who, through modern special effects, later starred as all of the Oompla-Loompas alongside Johnny Depp in “Charlie and the Chocolate Factory“) is Teeny Weeny, whose traveling companion is a racing snail.  There’s also the nervous Night Hob and his giant bat.  As Atreyu continues on, he meets Morla, the Ancient One (who speaks only in the third person and resembles a gigantic tortoise), and the constantly bickering duo Engywook and Urgl, who direct him to the Oracles, hoping he can find answers to aid him in his quest.  However, it’s Falkor, the “luck dragon”, and G’mork, an evil creature that has secretly been trailing Atreyu throughout his journey, that really add another dimension of good versus evil to the storyline.


Trailer for The NeverEnding Story

As a little girl, I was following in Bastian’s footsteps when I watched this movie; I was so enmeshed in the world of Fantasia that I felt like I became part of the story too.  I’m sure that I identified with Bastian, content to curl up with a book and lose himself in imagination, longed to be brave and fearless like Atreyu when confronted with terror the likes of G‘mork and the Nothing, and sympathized with the Empress, who could only sit and watch as her world literally crumbled around her.  It was that promise of something  magical being just on the horizon that appealed to me too though, and the idea that even a regular kid could do amazing things.  Looking back, the film probably even helped shape some of the things that I still believe in: hope, faith, and the power of loving family and friends to help one through the most grueling challenges.  As an adult, I was almost afraid to watch the movie again.  I didn’t want to break the spell.  The film had had such an impact on me and was such a truly fond memory that I hated to risk ruining that by seeing it through grownup eyes.  I finally caved a couple of years ago, and I’m not sorry that I did.  Yes, the special effects that once were so powerfully magical pale in our current world of CGI illusions.  It was also a little strange to remember what a big crush I had on Atreyu when I was younger.  I flatly refuse to watch any of the sequels, but my fascination with the original film has lingered after all of these years, and there’s still so much of its enchantment that hasn’t worn off.  In fact, I hope that there’s always at least a tiny part of me that forever believes the Empress when she says that things “can arise anew from your dreams and wishes.” The Empress and Bastian

{If you decide to watch the film, see if you can decipher what Bastian yells out into the storm when he throws open the window in the attic (I didn't figure it out until I was an adult). Also, check out The NeverEnding Story’s page on IMDb.com for a lot of fun trivia from the film.}
Posted by 2nd First Look at 11:04 PM