Murder He Wrote: An Interview with Keith Woernle


After following the hapless characters of The Murdererers each week, I was excited to have the opportunity to interview Keith Woernle, the writer and director of the series.  Keith's responses are a veritable "behind the scenes" into the creative process of the series; to learn more about the writer, cast and crew, read on.  If you hope to learn the identity of the killer though, I'm afraid that you'll have to join the rest of us as we wait in suspense.


* What inspired you to write the series?

Well, the idea was actually brought to me by Robin [Watson] and Natalie [Pero], who played Amber and Eva, respectively.  There was kind of a lull, acting-wise, as it was getting to be holiday season, and both of them were looking to do something that was simply a lot of fun, but that they could be proud of at the same time.  Robin brought me on simply to write something original for them.  It wasn't until later that I took over the reins as director.


* What drew you to the combination murder mystery/comedy genre?

Robin, Natalie and I simply met in a coffee shop and just brainstormed ideas.  We had a few ideas with some meat to them, and obviously we suggested just some very outlandish, pure garbage comedy series ideas.  I think in those four hours or so the idea of a murder mystery comedy somewhat evolved on its own.  It was something we all thought could be fun to shoot and I thought it would make an interesting challenge to write. 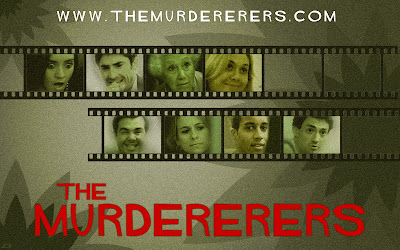 * Did you write this specifically with the intent to turn it into a web series, and if so, what drew you to using the internet as a means to present your work to the public?

Yes, it was always intended for the web.  After we were pleased with the first part, we realized it could be morphed into a short film and sent to festivals, but from the start even to now it was simply for us, for the web, and for fun.  We aimed at the internet simply because that new media is the easiest, fastest, and cheapest way to get a project out.  This is a SAG-licensed series, but to get it into television or theater would have taken months and months, and probably a lot more money than we had.


* In the series one commentary, you mention that one of the actors is someone you knew from college.  How did you go about choosing the rest of the cast?

All very different, really.  I wrote Robin and Natalie's parts specifically for them.  I myself was intended to be Bruce at the end of the first draft, but as was pointed out to me, Percival was simply a darker side of myself, so I was informed that I'd be silly not to play him.  Nick [Clark], I simply met through a mutual friend, and I didn't think of him 'til about a week after we were casting Bruce, and I realized that he looked and acted so serious that he'd be perfect.  Haley [Strode], I met my senior year of college while shooting an independent film that she starred in.  She and I are very close, so I wanted her in this, even if it was as the limited role of Miranda.  Robin gets the credit for the scene-stealing Beverly, played by Margaret Sutton. Margaret was a friend of hers and Robin convinced her to come shoot the series.  And then Joe [Doyle] is a stand-up comic, and a mutual friend of mine recommended him.


* You play a role in the series yourself.  Being the writer of the script, obviously you knew the nuances of that character and how you intended him to be played.  Were there any surprises for you in how the rest of the cast portrayed the other characters you'd created?

Um, a little.  It turns out I'm a pretty anal director and had a very specific vision in mind for each character.  I think Margaret surprised me by how much energy she gave Beverly, who basically shouts everything at the ceiling.  I was really pleased with the direction both Nick and Haley took. Nick was always looking around in deep thought in every scene, which I thought was perfect for the hapless Bruce.  And Haley basically turned the role of Miranda into a cheerful dog.  You can see her character light up any time someone says anything.  She basically has no forethought and is excited by every little thing that happens.  She basically took a forgettable two-dimensional character and made her memorable.  I really enjoyed watching all the characters' reactions while other characters were talking.  Especially Nick.  He killed me.


* How did the crew for this project come together?

Well, we had a lightning fast shoot.  So it was a very skeleton crew, except for the stuff in post.  Will Carnahan was DP on a film I did last year.  I liked his energy and attitude and brought him on.  Philip Bladh was found by Robin, and he handled about 7 jobs as our sound department guru, and did a terrific job.  Michael Dearie was a friend of Natalie's and was our AC and basically a PA.  As for post, I met Javier through a joint friend, Michael Nes, who highly recommended him as an editor.  And our composer, Marty Farris, was another friend from college.  He wrote an amazing score, and impressively, did it from Nashville without getting to work with any of us in person


* The entire project looks like it's a lot of fun to create, and series one ends with a lot of unanswered questions for the audience.  Do you have a specific endpoint in mind, or will you keep writing and producing the series as long as new ideas come to you?

Oh, the series has an end, for sure.  I wrote out ten episodes originally, so there's definitely a resolution that provides the answers for how all this is happening.  We were only able to film the first four episodes due to money and time constraints, but all those questions have answers.  We'll be filming the conclusion of the series as soon as it's affordable and everyone has the time.  And I think the finished project will look amazing.


* Thank you for taking the time to do this interview.  I'm looking forward to those future episodes, and finding out just who the murdererer is!  Visit their website here: http://www.themurdererers.com
Posted by 2nd First Look at 1:18 AM

Like the kitschy t-shirts I see every year at Polish Fest in Milwaukee, I’m not afraid to advertise that I’m “Polish & Proud”.  Despite the stereotypes and jokes, it’s an honor to have roots in a country and people who have routinely stared down adversity but stay strong.  I have some like-minded friends of the same nationality, so when I clicked on a link that one of them posted online the other day, I happened upon the wonderful mishmash of traditional and modern music that is Kapela ze Wsi Warszawa (Warsaw Village Band).  My first impression was: "Whoa--not my great-grandma’s folk music!" Intrigued, I kept looking up video clips, drawn in by the way they intertwine the past with present day, musically.  They use traditional instruments like fiddles, drums, and of course, vocals, but then turn convention on its head by adding elements like a DJ on turntables and even reggae beats.


Doing a little research on the band on their website (http://www.warsawvillageband.net/), I found out that they’re friends who, when they first formed the group in 1997, went out to villages in Poland, learning traditional folk songs from the elders.  After a few years on folk stages at home, they began their international career after the release of their second album.  2004 brought them a win for the prestigious BBC Radio 3 Award for World Music in Europe, along with a Grammy nomination here in the US that same year.  Since then, the band has kept busy, making more albums (“Uprooting”, “Infinity” and “Upmixing”, a collection of remixes). They’ve also been a presence on stages worldwide, touring over thirty countries on four continents.

Band member Wojtek Krzak says, “…We have still to fight for our identity…beauty and identity is still in the roots.” While purists could argue that mixing folk songs with modern devices destroys their integrity, I disagree. For people (not unlike me) whose exposure to traditional Polish folk tunes has been limited to polkas, this band opens up a new avenue to explore. Somehow, even though it’s not “her” folk music, I can picture my great-grandma with a big smile, getting out of her chair and dancing along. The spirit of the Polish people will always be rooted in beauty, and music was, and still is, a means to keep that alive.
Posted by 2nd First Look at 10:37 PM