It was the early noughties and it had been years since my favorite band, Kula Shaker, released a new album. Their 1999 album, "Peasants, Pigs & Astronauts," was the last fans heard from the Brit-pop band. This was also a time when the Internet wasn't as saturated with content, so there wasn't much information pertaining to the whereabouts of the band. I kept waiting, along with thousands of fans, for the slightest bit of news.

Then out of the blue, singer/guitarist Crispian Mills (frontman for Kula Shaker) put out a personal website with some demos of what was going to be a solo album. If I remember correctly, there were four tracks on display with limited preview time. Although they were only short samples, chills went up my arm from what I heard. At the time I thought maybe this would just be a side project before Kula Shaker got back into the studio.

Time crept by and no news appeared, and Crispian's website seemed to have be left for dead. As months went by his website was no longer active. Living in the States, it was tough finding information about smaller artists in the UK. All I knew was that I had wished I somehow copied those solo demos to my hard drive.

This is when things get hazy for me. I don't remember how I found out, but suddenly there was a single being released by a band named The Jeevas. Their frontman? Crispian Mills.

I remember hearing a preview of their single, "Virginia," and being excited by its energy. It was definitely Crispian's voice but the sound was very different from the mystical, retro 1960s psychedelic rock of Kula Shaker. They had a more 1970s rock feel. And though I could hear a bit of Creedence Clearwater Revival, The Jimi Hendrix Experience, and even Bob Dylan, The Jeevas truly had a sound all their own.


I bought the single (on CD) as soon as I found a website that shipped to the United States. The single included two other tracks: "Stoned Love" and "Old Friends, New Faces." As much as I liked "Virginia," it was "Stoned Love" that convinced me that The Jeevas were onto something great. (On a side note, "Old Friends, New Faces" is a live track of a renamed Kula Shaker song called "Gokula". Additionally, "Gokula" uses a guitar riff from George Harrison's song "Ski-ing". Apparently Harrison was sent the track and gave his blessing.)

The band includes Crispian Mills (vocals/guitar), Dan McKinna (bass), and Andy Nixon (drums). It's a powerful debut from three expert musicians. They put out their first album, "1 2 3 4," in 2002. The album has a live feel to it and squeezes the most out of three instruments. Occasionally they add keyboards and various instruments on selected tracks like on my favorite, "Silver Apples." It's a short 10-track album but it feels concentrated with pure goodness. There's a nice variety throughout the album, with several standout tracks.

The album starts with four bleeps and one long beep before the voice of a radio announcer comes on to introduce The Jeevas. The announcer reappears every now and then, but thankfully he never annoys.

After the radio-friendly pop song "Virginia," we hear a different side of the band. "Ghost (Cowboys In The Movies)" is a slower, bluesy track with an excellent guitar riff. It's very singable and I can imagine a crowd singing along. Immediately after, we hear a more wild track with "You Got My Number." It's the only song on the album not written by Crispian Mills. The song comes from punk band The Undertones, but The Jeevas do a great job making it into a pop-rock tune.

"What Is It For" is another bluesy track; this one, however, showcases Crispian's lovely voice. It's hard for me not to sing this one out loud like I'm some kind of crooner. The guitar is rich and vibrant, for the most part. There's a moment when it switches on some distortion, and it's in the most appropriate part. And though I've focused much on Crispian's voice and guitar work, this track is an example of McKinna's bass, and Nixon's amazing drums. The Jeevas, in general, boast a trio of quality musicians. As much as I adore Kula Shaker and its members, Crispian did a great job finding another solid band. I remember thinking that if Kula Shaker was to never reunite, then at least we have The Jeevas.

Now that I've introduced the first few tracks of the album, you'd think that you have an idea of the kind of music to expect from the rest of the album. But you'd be surprised. They've currently mixed pop-rock and bluesy tracks, but by the time you get to "Scary Parents" and "Teenage Breakdown" you hear a band that's not afraid to experiment. Now they're getting into more alternative territory. Crispian begins playing around with different guitar effects, and Nixon's drumming have a looser, jazzier feel. I personally hear some influence from drummer Mitch Mitchell of The Jimi Hendrix Experience.

My absolute favorite track is "Silver Apples." For me, it stands out as The Jeevas best track on this album, maybe even of their entire catalog. There's so much energy in it that it's hard not to be affected. McKinna's bass and Crispian's main guitar riff have a driving effect, and Nixon's drums are maniacal. This is Nixon at his best. The guitar almost sounds mechanical until it slides into a more organic, grungy distorted bending of notes. And if that wasn't enough, there's a cool keyboard/synthesizer that comes into play on the later half of the track.

The album ends with the sweet, more somber tune, "Edge of the World." It sounds like a more straightforward tune, but one that only The Jeevas could have produced.


"1 2 3 4" has energy, heart, and originality. My expectations for a followup album were high. Thankfully, "Cowboys And Indians" did not disappoint.

"Cowboys and Indians" starts off with a very tight rock tune called "Black & Blue." It's a great start to what will be a strange mix of musical styles. It's followed by a cover of Creedence Clearwater Revival's "Have You Ever Seen The Rain?" (written by John Fogerty). It's a loyal rendition to the original song, but a bit more rock and a little less country.

The third track, "Healing Hands," has some Kula Shaker flavor to it with its mystical guitar riff. And this brings me to one of the reasons I love Crispian Mills so much: his guitar work. There's something natural to his playing. It's as if he was born with a guitar in hand. He knows when and how to add a powerful solo. Not every song needs it and he knows it, but when you hear his solos it's obvious he was meant to be in a rock band.

Crispian's also great at choosing songs to cover. With Kula Shaker he covered Deep Purple's "Hush" to much acclaim, and with The Jeevas' second album he chose two very different kinds of songs. One is CCR's "Have You Ever Seen The Rain?" and later in the album is Bob Dylan's "Masters of War."  And though both songs are connected with themes of war, their presentations are very different. "Masters of War" has to be one of the best covers of a Dylan song. It's dark and pulsating. You can feel the tension of something horrible on its way. And just before the five minute mark, you finally get that violent release.


Other tracks on the album range from silly, like "Que Pasa (Con Tu Culo)?" to political, like "How Much Do You Suck?" There's a loud anthem, like "Good Man Down," and a quiet lullaby, like "Rio Grande". Somewhere in the middle is one of my favorites from "Cowboys And Indians." The track "Girl Without A Name" has a chill vibe to it, but upbeat enough to tap your toes. "Cowboys And Indians" has more variety than its predecessor without losing the quality.


And besides having two incredible albums, I'm amazed by the quality of their b-sides. They could have easily taken those extra tracks and added them to either of the albums. They may be more difficult to find these days, but if you can get a hold of them I recommend the following b-side tracks: 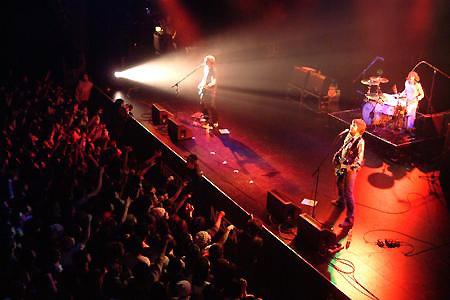 For anyone who's a Kula Shaker fan, try not to compare the styles because they're both very different bands. The only thing similar is the quality of music and originality of songwriting. Sadly, The Jeevas decided to split, but the good news is that it happened so Crispian Mills could reform Kula Shaker. We may or may not hear more from The Jeevas, but at least they produced two very tight albums.