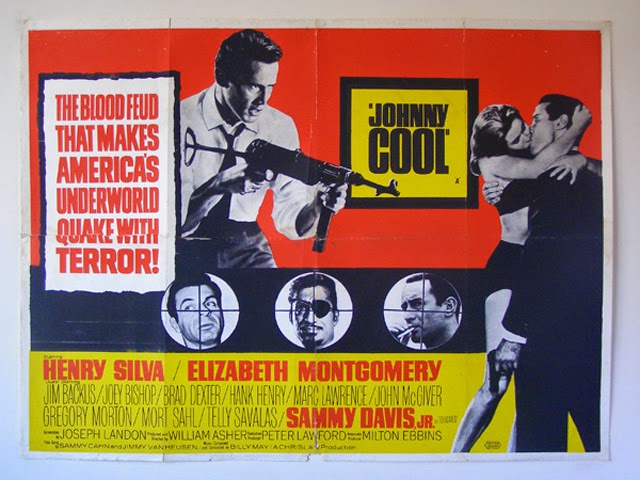 Sometimes, a film comes along that defies all reason and is remarkable, in spite of itself.

In the 1960s, William Asher was one of the most prolific directors of television sitcoms, with many episodes of "I Love Lucy" and "Bewitched" under his belt. Occasionally, he'd venture beyond the confines of the small screen and direct films on the big screen - films like How to Stuff a Wild Bikini and Beach Blanket Bingo. Reading his filmography, you get the impression he was a hard-working hack, responsible for an impressively long list of mediocre entertainment.

In 1963, the actor Peter Lawford, best known as a member of Frank Sinatra's "rat pack," produced his first movie, having bought the rights to a little known novel, "The Kingdom of Johnny Cool," by John McPartland. Lawford, operating on a small budget, hired Asher as his director and a cast of largely unknown actors, spicing things up with cameos by comedian Mort Sahl and Rat Pack friends like Sammy Davis Jr. and Joey Bishop. Davis even sang the theme song.

Johnny Cool stars the great character actor Henry Silva, fresh off of his chilling performance as a Korean heavy in The Manchurian Candidate, starring Sinatra. My guess is that Silva got his opportunity in Johnny Cool from working alongside Sinatra. In any case, Johnny Cool would stand as Silva's first and only lead role in a Hollywood production.

The movie opens in World War II Sicily in 1943. After witnessing his mother's murder by the Nazis, a boy named Salvatore Giordano joins the local mob. Later, he is groomed by Johnny Collini, a mob head who was exiled from the Unites States back to Sicily, to assume the identity of Johnny Cool and exact revenge on all the men who turned on Collini.

The movie is about Cool's arrival in America and the subsequent war he starts. As played by Silva, Cool becomes a great anti-hero, ruthless and brutal, and far superior in his brutality than anything even the mob bosses he goes after have seen. In this respect, the movie is years ahead of its time, as Silva's character invites comparisons to the leads of recent revenge movies, like Mel Gibson in Payback and Liam Neeson in the Taken films.

One by one, Silva bumps off the targets on his list, and it's the combination of glee and brutality with which he goes about his business that is jarring and so ahead of its time. To be clear, there isn't really any blood or gore shown, but it's implied, and Silva never feels a pang of conscience. He truly enjoys his work.

Shortly after coming to America, Cool meets a beautiful divorcee played by a young Elizabeth Montgomery, who, in real life, was already married to Asher, a year before Asher would produce and direct her in the sitcom "Bewitched." In Johnny Cool, she is very sexy, and she gives a great performance as a woman who thinks she's more worldly than she is. She quickly falls for Johnny, and her attraction to his hard edges and darkness is completely believable. She is very desirable, and has to be for us to believe that Silva/Cool, who is so single-minded in his evil, would allow himself to fall in love with her.

A recipe for effective revenge movies has emerged in recent years. The best revenge movies feature an anti-hero, a character who is so lost in his need for revenge that he becomes nearly inhuman. He is so traumatized and emotionally scarred that he loses perspective. Yet we root for him, for two reasons: one, he has enough charm and charisma that we become emotionally invested in the tragedy he's experienced, and two, in his blind pursuit of vengeance he develops skills and an attitude that transcend the normal limits of human capability and he becomes superhuman.

Some of the best revenge movies include Clint Eastwood's 1975 western epic, The Outlaw Josey Wales, Quentin Tarantino's Kill Bill films and Django Unchained, and Brian Helgelen's 1999 Payback. All of these films have the vengeance-lusting antihero as the primary character who develops superhuman skills - Wales becomes a superior gunfighter after experiencing the death of his family, in Kill Bill Uma Thurman is almost ridiculously skilled in martial arts, while in Payback Mel Gison becomes so single-mindedly obsessed with retrieving the $7,000 he is owed that he becomes a killing machine.

In Johnny Cool, the same storytelling techniques apply (albeit on a shoestring budget). As a child, Cool endures his share of tragedy and violence, and as an adult, he has enough charm and charisma to make his conquest of Montgomery completely believable. And he also becomes a killing machine, executing complicated and unexpected plans to murder his targets. It's in the brutal nihilism that Cool executes his murders and in the way the film gets us rooting for him that Johnny Cool is ahead of its time.


Johnny Cool has the look of a cheesy, low budget, early '60s film. It's in black and white, and is loud and crass. But stay with it and you'll be pulled into a story and characters that transcend the budgetary limitations and stand on their own.

It's almost blasphemous to say, given Asher's unimpressive filmography, but Johnny Cool looks like what I imagine a Quentin Tarantino or Martin Scorsese movie might look like had they had to operate with the same budgetary and censorship restrictions. In terms of attitude, Johnny Cool has plenty enough to compare to Goodfellas or Kill Bill.