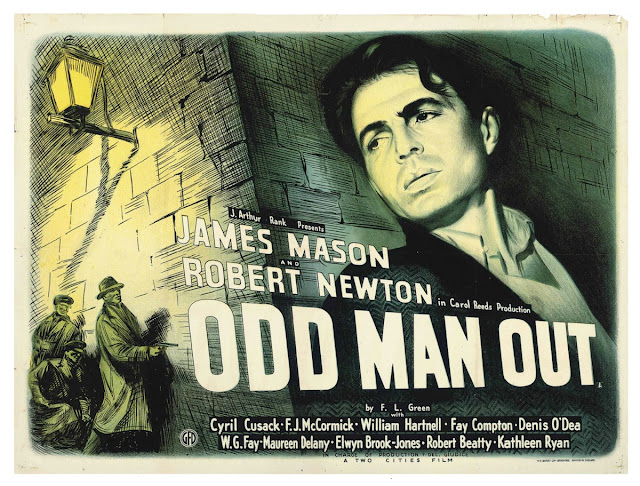 If I were compiling a list of the most under-appreciated films in movie history, there are a few that would come immediately to mind:  Ernst Lubitsch's 1940 The Shop Around the Corner (the film that essentially defined the romantic comedy genre), Preston Sturges' censor bending and outrageous 1944 comedy The Miracle of Morgan's Creek, John Huston's brilliant 1979 adaptation of the Flannery O'Connor novel Wise Blood, Jack Clayton's 1961 The Innocents, Bryan Forbes' Séance on a Wet Afternoon (1964), and John Boorman's 1987 triumph, Hope and Glory.  These are all highly regarded films but are too often overlooked these days, and, in my opinion, should be considered required viewing for anybody with a passion for movies.

But the all-time number one most under-appreciated film in history has to be Carol Reed's 1947 masterpiece, Odd Man Out.   Not only is it one of the greatest films I've ever seen, but I've never met anyone else who's ever seen it.  It's always been difficult to find on DVD.  For a while, it was on the Netflix instant queue, but it's been taken off for some time now.  It's all too frequently forgotten in lists of the best films ever made, even though Reed's 1949 The Third Man is often and justifiably included.  Why Odd Man Out is largely forgotten while The Third Man, made only two years later, has sustained its reputation and popularity is hard to figure.  You'd think that the high regard for The Third Man would lead to a wider appreciation of Odd Man Out, just as the acclaim for Orson Welles' Citizen Kane has lead to a wider following for his The Magnificent Ambersons.
﻿
Odd Man Out tells the story of Johnny McQueen, an IRA-like leader in an unidentified Irish city who is shaking off the rust of a recent imprisonment and illness.  While participating in the robbery of a mill, he is left behind, mortally wounded from a bullet fired by the same man he accidently kills.  He becomes the subject of a massive man hunt by the police.   The film follows him through the course of afternoon to midnight, as he seeks refuge on the way to either his death or salvation

I won't spoil things by revealing much more of the plot.  Suffice to say that nobody did man hunts like Carol Reed.  Those who are familiar with The Third Man will remember Joseph Cotten and Trevor Howard chasing Orson Welles through the sewers of Vienna; as great as those sequences are, imagine an entire film filled with the same tension and suspense.  McQueen encounters a variety of street characters who are torn between helping and sheltering him, and their loyalty or fear of the police.  Each character approaches McQueen from a different angle - some want to help, some want reward money, a priest wants his soul, an artist wants to paint him and capture the mystery of death, and finally, there is the woman who is in love with him.  The woman (played by Kathleen Ryan) is the only one with the pure motives and courage to commit herself to Johnny; in the end, none of the other characters are willing to risk their lives to save McQueen's.  The action then becomes a race between who will find McQueen first:  the woman who loves him, the police, or death.  The suspense is unrelenting and culminates in an unexpected ending that justifies the build-up.

McQueen is played by one of the greatest faces in cinema history, the incomparable James Mason.  Mason had a uniquely expressive face, with coal black eyes seated in deep and cavernous sockets and offset by dark and bushy eyebrows that seemed almost as expressive as his eyes.  No actor ever got more from his eyes than Mason, whether expressing the all-consuming obsession of Humbert Humbert in Stanley Kubrick's Lolita, or the desperation and raw exposed soul of Johnny McQueen.  It's a great performance that is sustained throughout the film, as McQueen becomes delirious with pain and begins to lose his grip on the mortal world.

Visually, Odd Man Out  is stunning.  It was shot in black and white by the cinematographer Robert Krasker, who a couple of years later would win an academy award for his work with Reed on The Third Man.  The images are bold and crisp, and hold up on television.   The film is shot like film noir, with an almost expressionistic use of light and shadows and heightened angular urban landscapes.  The camera conveys the senses of claustrophobia and isolation McQueen experiences.  Reed and Krasker, through their images, make visual the intimate universality of a man approaching his death.

There's a lot going on in Odd Man Out.  It explores questions about the price of political activism, loyalty versus self preservation, and the moral responsibility we have for each other.  In one of the film's great scenes, McQueen, delirious and delusional, is "posing" for a rather psychotic painter, played by Robert Newton, who strives to capture on the canvas the moment of death, the moment when all secrets are revealed to us.   As he sits there waiting for the artist to stop arguing with another man, McQueen hallucinates that the artists' other portraits come to life and form a congregation, with the priest speaking but unable to be heard above the artist's incessant arguing.  He starts to ruminate how "we've never really listened to you, have we," and then remembers the passage from Corinthians that starts with "when I was a child, I spoke as a child."  Then he regains enough strength to rise from the chair and loudly recite more verse from Corinthians:

"Though I speak with the tongues of men and angels, and have not charity, I am become as sounding brass, or a tinkling cymbal. And though I have the gift of prophecy, and understand all mysteries and all knowledge' and though I have all faith, so that I could remove mountains, and not have charity, I am nothing."

The artist is too thick to realize that the moment he'd been looking for has arrived.  McQueen sees beyond the walls of his own death, and he hears only the artist arguing, drowning everything out as if his voice were "a sounding brass," and he can see without charity, without love for his fellow man, he is nothing.  The love spoken of in Corinthians is an action, not just an emotion, not just faith.  The passage talks of the importance to demonstrate our love for one another through charity.  McQueen's long journey through the late afternoon to midnight then becomes a search for this charity, and the film's intense suspense is focused on whether he finds it or not.

Carol Reed had a long career as a director in Britain and Hollywood, making films from 1933 to 1972.  Although he won an Oscar in 1968 for the musical Oliver!, his career was really unexceptional save for the brief period in the late 40s when he made Odd Man Out, The Fallen Idol, and The Third Man.   It's a bit puzzling to watch, for example, his 1965 big budget Hollywood Michelangelo biography, the plodding The Agony and the Ecstasy, knowing that it was made by the same man who made Odd Man Out.  But Odd Man Out and The Third Man are both amazing films that have their own unique style and sensibility.  During this time, Reed was often regarded along with Alfred Hitchcock as the reigning masters of suspense, but there is nothing in Odd Man Out or The Third Man that resembles a Hitchcock film.  Reed was able, in these two films, to reveal depth and complexity of characters rarely found in any film, and he got truly great performances from his leads, Mason in Odd Man Out and Cotten and Welles in The Third Man.

Odd Man Out is one of the most perfect movies I've ever seen.  And I'm not alone. Of Odd Man Out, Roman Polanski once said:  "I still consider it as one of the best movies I've ever seen and a film which made me want to pursue this career more than anything else... I always dreamt of doing things of this sort or that style. To a certain extent I must say that I somehow perpetuate the ideas of that movie in what I do."