I first discovered comedian Patrice Oneal in the 90s during one of his performances on "Late Night with Conan O'Brien".  He was wearing a light-yellow button-up shirt (untucked) and casually walked out from behind the stage curtains.  His first topic: how big he was.  Like Bob Newhart before him, Oneal had one of the best comedic deliveries.  With a slight hesitation, he posed as an audience member and said, "Da-da-dats a big dude."  I was hooked.  He didn't mind poking fun at himself but he could trash others just as badly.  Some of his routines may have come across as vulgar and controversial but you couldn't help but agree with some of this points.

During that same performance he talked about how hard he had to act "street" and use his "angry face" to hide his love of The Beatles music while driving.  He also joked about his size.  He even showcased his "skinny look" by posing in a very distinct way and adjusting his shirt appropriately.   He wasn't like most comics, and certainly not like most Black comics.  Clearly, Oneal felt like an outsider.  Given his short stints on bigger projects throughout his career, it's more than a possibility.  And even though he was an expert at arguing the general consensus of topics that were a bit taboo, perhaps it was his fearless approach that made him an outcast.  But it's this unique way of doing things that made him one of the most respected and loved comedians.

Before his death (aged just 41), Patrice Oneal had appeared in several popular TV series, on stage, and most regularly on radio.  On television, he appeared on The Office, Arrested Development, and Chappell's Show which are among his most famous credits.  For whatever his reasons may have been, his tenure on such quality programming were always short-lived.  His film credits weren't as impressive but Oneal was more of a hit on stage and radio.  It's there where his talent could be better utilized.  I imagine on television he felt restricted, and instead preferred a media where he did not have to censor his material or accommodate the general audience.

As underused as he was on TV and film, he made his moments count.  Oneal had that unknown ability to make you laugh just from looking at him.  Not because of his physical features, but by simply having a presence of humor that surrounded him like a cloud of funny.  And whether it was self-imposed or simply by virtue, he made great use out of this talent.  His vocal inflections were completely in sync to the meaning of words he was saying.  It's no wonder he made such a successful career on radio.

He also knew how to translate people's inner monologue into words.  It didn't matter how dark or strange the thought, he understood what was on most men's minds and could communicate it to the world, from the differences in men's facial reactions to a good-looking butt and good-looking breasts. And there is a difference - but only Oneal knew how best to explain it.  His examples (if you can picture these) was a look of being impressed (bottom lip out and head nodding) for the former, and a look of pain (eyes closed, head turned to the side, and lips miming the word "Ooo") for the latter.

And though that topic may seem sketchy to some, the humor was more in his delivery and extensive explanations that detailed every bit of thought process, whether talking about women, marriage and dating, health concerns, or racism. 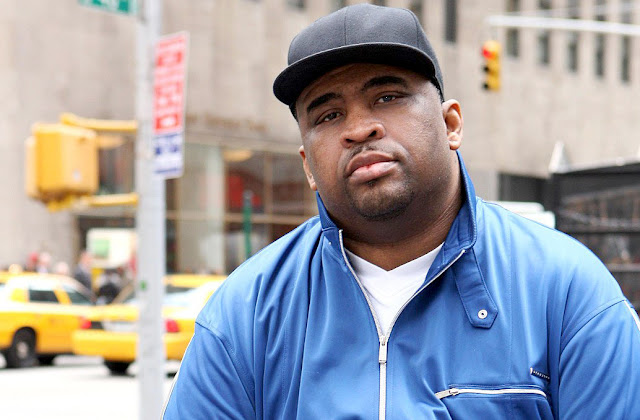 Among several other performances on HBO, Comedy Central, and on the web*, his first one-hour live performance was entitled Elephant in the Room.  It aired on Comedy Central on February 19, 2011 and would be his last live performance recorded for television.  His digital comedy albums Mr. P (February 2012) and Better Than You (November 2012) were released posthumously and are available on his website, iTunes, and Amazon.

Fortunately for fans new and old, Elephant in the Room is one of the best examples of an artist in his prime.  It showcases everything about what makes Oneal so great - his topics, his delivery, and best of all, his hilarious point of view.

Patrice Oneal was a comedian on the rise with his talent already intact.  His hard-core fans include Louie CK, Chris Rock, Colin Quinn, Wanda Sykes, Ricky Gervais, Jim Norton, and Kevin Hart, among many more. Unfortunately, Oneal struggled with diabetes and weight issues, and on November 29, 2011, he died from complications from a stroke.  He died too soon but his comedy will never be forgotten.

For more information and to watch clips from his performances, visit his official website: www.patriceoneal.com

* Patrice Oneal's webcast was entitled The Patrice Oneal Show - Coming Soon! and is available digitally and on DVD.

TRIVIA: Patrice Lumumba Malcolm Oneal was named after Patrice Lumumba and Malcolm X.  And although credited more commonly as "Patrice O'Neal", he preferred his surname name spelled without the apostrophe.