Writing these articles and trying to find the adequate words to eloquently put across what makes a cherished film special to me whilst encouraging you to check it out can sometimes be challenging. This, however, is not one of those times because Richard Franklin’s Link (1986), sells itself: it’s an 80s horror film about a murderous butler stalking and harassing Elizabeth Shue in an isolated country house.  Oh, and the butler also happens to be a chimpanzee. If, after reading that sentence, your interest is not piqued then chances are this probably isn’t the film for you. Thanks for coming, please check out the rest of the site and I’m sure you’ll find something more up your alley. Those of you still reading however (yes, both of you) need to track down a copy of this film, fill your fridge with snacks and beer, get a few friends round and just enjoy the hell out of this movie. 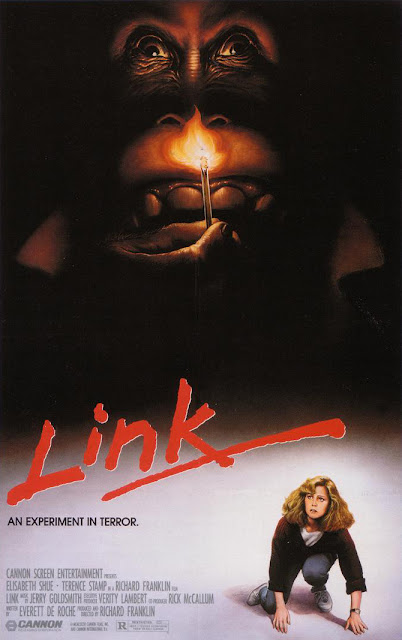 Shue stars as Jane, a student who gets a job as a research assistant with Dr. Steven Phillip (Terrence Stamp), an expert in chimpanzee behaviour who lives in a secluded country house with three pet apes. One of his apes, the eponymous Link, also acts as a butler of sorts and quickly seems to bond with Jane. Inevitably, it’s not long before things go awry as Dr. Phil goes missing, leaving Jane alone with the animals; worse yet, Link starts showing some increasingly threatening behaviour, leaving Jane fearing for her life and on the run.

Before we proceed any further, let’s just deal with the ape-shaped elephant in the room; Link is supposed to be a chimpanzee despite the fact that, for reasons known only to the production team, he is clearly played by an orangutan. He is never directly named as a chimp (or orangutan, for that matter) but it is heavily implied in dialogue. Couple this with the fact that his owner is a chimp expert, the other animals he lives with are chimps and his fur has been dyed black (orangutans normally being a reddish colour), and we are left only two options: 1) Link is supposed to be a chimp, and 2) Link is supposed to be a goth orangutan. I’d love to give the benefit of the doubt and go with option number two, but goths rarely make good villains, as they are more likely to hurt themselves than anyone else. It seems bizarre that the script wasn’t changed to incorporate the fact that the central focus of the film is a different species altogether, but it was the 80s; everyone was too busy sniffing lines off their coffee-table-sized cell phones to sweat the small stuff. So, with that in mind, let’s just accept that in the world of the film, Link is a chimp, and the orangutan that plays him is an amazing actor....

....no seriously, he is! Shue does a solid job and deserves extra credit for owning a role in which she spends 70% of her screen time opposite apes, and Terrence Stamp holds up his end just fine, but the whole reason this film is so watchable is Link himself. Sure he is cute and frequently laugh out loud comical but he is also quite unnerving and incredibly creepy at times (check out the scene where he interrupts Jane trying to take a bath and tell me it doesn’t freak you out!). Whatever he does though, it is hard to take your eyes off Link when he is on screen; he’s charismatic, expressive, and let’s not forget he’s wearing an adorable little suit. For reasons I won’t go into (at the risk of revealing spoilers) he is also a fairly sympathetic character, you don’t exactly root for him but you can totally understand where he’s coming from.  In that regard Link becomes a little bit like Falling Down (1993), but with a bloody great big ape losing his shit instead of Michael Douglas.

Had the filmmakers gone down the far-too-often trodden path of putting a guy in an ape suit to play Link it would have been a very different film, because no matter how good a performer he is and no matter how realistic the suit is, a guy in an ape suit will always look like a guy in an ape suit (that includes CGI ape suits; sorry, Andy Serkis). Take the 1961 film Konga by John Lamont, a film which isn’t a million miles away from Link in terms of premise. In it, a scientist uses a specially created serum to turn a chimp into a gorilla which he then hypnotizes and sends out to do his murderous bidding. Setting aside for a second the fact that had the scientist simply acquired a gorilla instead of a chimp in the first instance he could have saved himself a lot of trouble, the main problem with this film is that no matter how much tension it tries to build, or how much menace it tries to attribute to the titular character, it always falls completely flat when Konga makes his appearance (see below). Admittedly, Konga is a very different film to Link in terms of style and tone but even though its premise is silly from the outset and it’s all a bit tongue in cheek, the second you see a man lolloping about the screen in a gorilla suit it goes from being enchantingly camp to flat out ridiculous. The whole preoccupation with apes in horror is down to their genetic proximity and physical similarity to man; they are a primitive reflection of us which touches a raw nerve. This is an effect which can be used to great effect in the right hands, so it only stands to reason that the effect is diminished when you substitute a real ape for any artificial substitute. I’m sure it wasn’t easy training the animals that appear in Link, but the end result is worth it and gives credibility to the rest of the film.

With the exception of King Kong (1933)--which is pretty much untouchable due to its effect and legacy--I’d put a claim to Link being the best ape/monkey horror made to date (feel free to disagree in the comments section). This is no small feat when you consider that the horror genre has been quietly obsessed with apes and monkeys for a peculiarly long time. I’d also put a case forward for it being one of the better films in the slasher sub-genre too, the primary reason being the effective pacing. Link starts quite slowly, not only establishing the characters but also taking the time to disseminate information about the often violent nature of chimps and the damage they can do to a human. This was especially necessary for a 1986 audience as a lot of this information was only just being discovered. It helps to gradually build the impending peril and establish the chimps as believable potential villains. The film then focuses on constructing a feeling of isolation and abandonment for Jane and the audience, all the time still increasing the tension/expectation before smoothly transitioning into the final third of the film as the action becomes much more frantic and reaches its climax. It doesn’t try to milk it for too long, as can often be the case in slasher films when they try and sustain that high octane level for an entire film; there’s only so long that you can watch someone running in hysterics before you are dulled to it, and Link times its final act to perfection.

It’s easy to scare people with a serial killer, the supernatural or a predatory animal but it’s much more of a challenge to do it with something as un-menacing as a chimp/orangutan butler. Link is not a particularly violent film, it isn’t disturbing, it won’t give you bad dreams and even though it will make you jump it will also make you laugh. It’s a horror film to enjoy, not endure. A solid, well executed genre piece with a simple formula which is easy to consume. In fact, the only downside to this film is that it’s turned one of my most beloved Simpsons quotes into a chilling warning:

Ralph: “How many monkey butlers will there be?”


For more information about Link please check out IMDb: http://uk.imdb.com/title/tt0091415
Posted by Anonymous at 6:30 PM