Well, it’s November, and in a couple of days, our long national nightmare will be behind us.  After years of half truths, distorted facts, and bald faced lies, after the endless prognostications and pontifications of windbag analysts, after thousands of messages being approved by an endless parade of clowns, our election season will finally be over. Righty or Lefty, Democrat or Republican, I have the same recommendation - after you’ve cast your vote and settle in for the night, my advice would be to turn off those depressing election returns and instead put on the movie Duck Soup, starring the great Marx Brothers.
The last man nearly ruined this place
He didn't know what to do with it
If you think this country's bad off now,
Just wait 'til I get through with it

- from “The Laws of My Administration” from Duck Soup

It seems that every election cycle now lasts longer, is more divisive, and the candidates are, frankly, either more incompetent or more insane than before. The whole political process has become an exercise in escalating absurdity.  This is where Duck Soup is such a pleasant contrast –at least Groucho, Chico and Harpo are intentionally absurd, and the republics of Freedonia and Sylvania are hilariously fictional. Turn off MSNBC or Fox News and put off until morning the depressing truth that the surreal and zany world we wake up to each day is sadly real.

Watching Duck Soup, it occurs to me I have seen it more times than I can count, more times than any other movie, and it still makes me laugh out loud. The Marx Brothers, for me, have always been the best anitodote for that heavy, bloated and sad feeling you get from too much reality.

My discovery of the Marx Brothers was a happy accident.  A little bit of background information that reveals how ancient I am: I grew up before the internet, before DVDs, before VCRs, before cable television, even before remote controls.   All the television we had was three networks, PBS, and a couple of fuzzy UHF channels. There were no movie rentals, no Netflix or Blockbusters or Best Buys. Egads, how primitive!

So it was that at some point (I was probably twelve or thirteen years old), I stumbled upon a late show airing of A Night at the Opera. There was this goofy fast talking guy with a big black moustache smoking a cigar, another guy with a cheesy Italian accent and a funny hat, and finally a guy with a blonde wig who never talked but seemed to carry anything and everything in his overcoat. I watched the mayhem and pandemonium unfold as they destroyed the opera, and I was stunned and amazed. I'd seen Laurel and Hardy and W.C.Fields before but I'd never seen anything like this. The Marx Brothers broke all the rules. They were manic, frenetic, insane, and funny - exhilaratingly and intelligently funny. The idea that things didn't have to make sense--that, in fact, things somehow made more sense when they didn't make any sense--was a revelation to me.

I became a devotee. I remember being a sophomore in high school and making friends in my Spanish class with another guy who'd recently discovered the Marx Brothers. I’d take the weekly T.V. listing in the Sunday paper and look for airings of their films. He’d do the same, and on Monday we’d compare notes. “Did you see that channel six is showing Monkey Business at 1:30 on Thursday morning?” I remember staying up and sneaking past my mom’s room to watch it, and the bleary eyed school day that followed, my somnambulistic trance interrupted only by Spanish class, when my friend and I got together to excitedly compare notes, including the customs scene where they all tried to gain entry on an ocean liner by impersonating Maurice Chevalier. 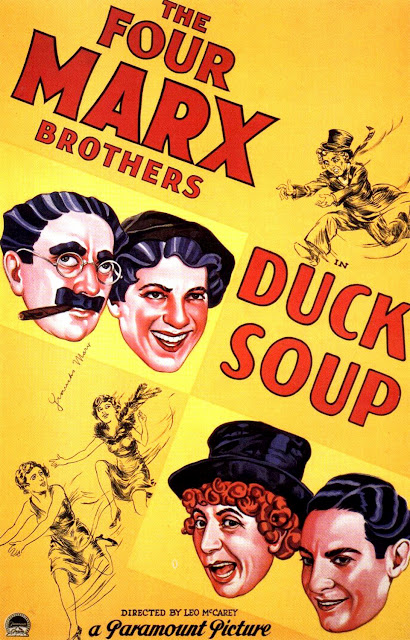 I don’t remember exactly when I saw Duck Soup for the first time, but I know I fell in love with it immediately. I instantly recognized it as the funniest of the Marx brothers movies, and years later, when I started to develop a slightly more sophisticated perspective, my appreciation for what a truly great film it is grew.  I came to consider it my all time favorite comedy.

It’s by far the most cinematic of all of the Marx Brothers movies.  Directed by the great Leo McCarey and released in 1933, Duck Soup was the fifth Marx Brothers film. The four that proceeded it were largely filmed stage performances, with Cocoanuts and Animal Crackers having been produced and performed by the brothers on the stage, and Monkey Business and Horsefeathers following a similar formula. McCarey added strong visuals and elaborately imaginative musical numbers and clever sight gags. A veteran of screen comedy who'd started out in the silent era (developing the film personas of Laurel and Hardy), McCarey highlighted the brilliant physical humor of Chico and Harpo by staging several amazing sequences, including the two peanut vendor scenes with the great straight man Edgar Kennedy (known as the master of the slow burn) and the justifiably famous and often imitated mirror scene, where Groucho tries to outwit his reflection, Harpo.

The movie is paced so that you hardly have time to catch your breath between laughs. There are no lulls; it begins on a high note and never slows down. It's short, clocking in at only seventy minutes. There are no boring romantic sub plots and no pathos – just balls to the wall silliness, absurdity and surrealism.﻿

The premise of Duck Soup is that the richest woman in Freedonia, Mrs. Teasdale (played by the brilliant Margaret Dumont), the widow of the country’s previous leader, is responsible for naming her late husband’s successor (imagine, the wealthy choosing the new leader – how unrealistic is that?). She chooses someone named Rufus T. Firefly (Groucho, of course; with a name like "Rufus T. Firefly", who else?). We are given no indication of who he is or what his qualifications are; he simply enters by sliding down a pole in the middle of his inauguration ceremony. After Mrs. Teasdale extends the wishes of every man, woman and child, Firefly responds with the following inspired nonsense:

FIREFLY: Never mind that stuff, pick a card. (presents a deck of cards for Teasdale to choose from)
TEASDALE: A card? What will I do with a card?
FIREFLY: You can keep it, I’ve got 51 left.

This is one of the things I love the most about the Marx Brothers and Duck Soup in particular: no time is wasted explaining why or how things came to be, we just get right into it. We don’t ask why Firefly was chosen any more than we ask why he starts instantly insulting and romancing Teasdale. It’s Groucho and Margaret Dumont, and this is what they do:

FIREFLY: Will you marry me? Did he leave you any money? Answer the second question first.
TEASDALE: He left me his entire fortune.
FIREFLY: Is that so? Can’t you see what I’m trying to tell you, I love you.
TEASDALE: Oh, your excellency!
FIREFLY: You’re not so bad yourself.

We learn early on that the neighboring country, Sylvania, has designs upon Freedonia, and that the ambassador, Trentino (the perfect foil for Firefly, expertly played by Louis Calhern), is trying to woo Teasdale and bring Freedonia under the Sylvania flag.  Trentino has hired Chicolini and Pinky (Chico and Harpo) to spy on Firefly and dig up some dirt on Freedonia’s new leader. In one of my favorite scenes from any movie ever, they file their report, which includes the following exchange:


TRENTINO: Now, Chicolini, I want a full, detailed report of your investigation.
CHICOLINI: All right, I tell you. Monday we watch-a Firefly's house, but he no come out. He wasn't home. Tuesday we go to the ball game, but he fool us. He no show up. Wednesday he go to the ball game, and we fool him. We no show up. Thursday was a double-header. Nobody show up. Friday it rained all day. There was no ball game, so we stayed home and we listened to it on-a the radio.
TRENTINO (exasperated): Then you didn't shadow Firefly?
CHICOLINI: Oh, sure we shadow Firefly. We shadow him all day.
TRENTINO: But what day was that?
CHICOLINI: Shadowday. Hahaha. That's-a some joke, eh, boss?

Later we are given access to Firefly’s cabinet meeting, where the following exchange is one of many to confirm our suspicions that our leaders are idiots:

Then there are the scenes where Firefly insults Trentino, trying to goad him to going to war:

TEASDALE: I want to present to you ambassador Trentino of Sylvania. Having him with us today is a great pleasure.
TRENTINO: Thank you, but I can’t stay very long.
FIREFLY: That’s an even greater pleasure.


Later on, Firefly crashes a garden party Trentino was throwing for Teasdale:


FIREFLY: I can't give you wealth, but, we can have a little family of our own.
TEASDALE: Oh Rufus!
FIREFLY: All I can offer you is a Rufus over your head.
TEASDALE: Your Excellency. I really don't know what to say.
FIREFLY: I wouldn't know what to say either if I was in your place. (To Trentino) Maybe you can suggest something. As a matter of fact, you do suggest something. To me you suggest a baboon.
TRENTINO: What?
FIREFLY: I'm sorry I said that. It isn't fair to the rest of the baboons.

Then there is an attempt by Chicolini and Pinky, both pretending to be Firefly, trying to steal the plans of war, followed by Chicolini’s trial, which leads to the declaration of war with Sylvania.  But these are all plot details, and there is nothing in a Marx Brothers movie less important than the plot.

There are no piano or harp solos, momentum killing interludes that are a staple of most Marx Brothers movies, but there are a couple of big musical numbers - and thanks to McCarey’s touch, they work; they don’t slow the film down. The big production number, “Freedonia’s Going to War” is as zany as anything else, and works as devastating satire, laying to waste the fake patriotism and insincere nationalism that are used to whip any country up into going to war.

The war scenes are a masterpiece of corny surrealistic slapstick. At one point Harpo is sent out to sign up new recruits; he wanders the countryside wearing an advertisement that says, “Join the Army and see the Navy.” Broadcasting over the radio, Firefly sends bizarre correspondences from the front, including “Last night the enemy captured hills twenty-seven and twenty-eight, throwing thirteen hillbillies out of work.” Every time the camera cuts to Groucho, he's wearing a different uniform.

It’s hard to believe that Duck Soup is nearly eighty years old.  It's amazing how relevant its satire remains today, and how closely the fictional republics of Freedonia and Sylvania resemble the current landscape. It ranks right up there with Stanley Kubrick’s Dr. Strangelove as the greatest satires of politics and war ever made, but don’t let that fool you. It is first and foremost brilliantly silly and funny.  Watch it, and for its seventy minutes, just sit back and laugh, and forget about the fact that the things you are laughing at in the movie are the same things that make you want to cry in the real world.

For more about Duck Soup, check out its IMDB page:  www.imdb.com/title/tt0023969