The Far Side of Gary Larson

Growing up swiping the comic section of my dad's newspaper, I remember reading the usual strips (Garfield, Peanuts, etc.).  But as I aged, I grew more and more fond of this strange, single-panel comic entitled The Far Side.  The comic strip was always weird and a bit morbid, and despite my youth, I continued to read it regularly.  It wasn't until high school when I realized how unique this comic was.  While the surrounding strips became dry and tired, The Far Side continued its steady hilarity and ambiguity. 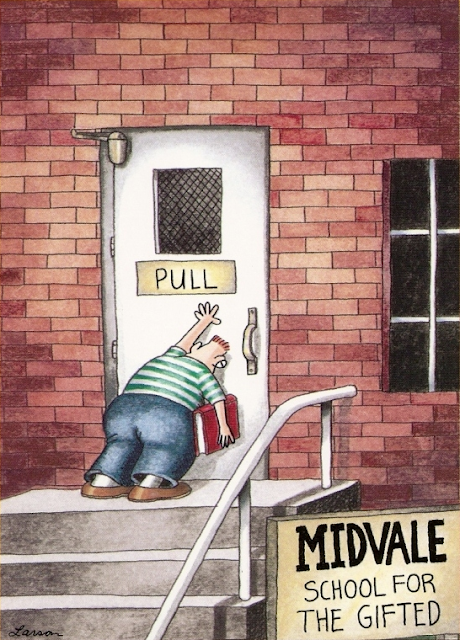 Running from 1980-1995, creator Gary Larson's comic strip had a surrealistic style.  The Far Side often focused on anthropomorphic views of the world, bizarre situations, and relationships between man and animal.  He specialized in biological points of view, frequently using animals (especially insects, cows, ducks, dogs, cats, and cavemen).  His background in biology helped bring a unique insight to creatures and their eerie similarities with modern society.

But The Far Side almost never happened.  Larson was working at a record shop in Seattle, Washington when he decided it was time to make a career change.  He produced a few crude drawings and took them to Seattle-based magazine Pacific Search (now The Seattle Times: Pacific NW Magazine). Eventually, in 1979, Larson submitted his work to The Seattle Times under the title Nature’s Way, which was published weekly.

Despite early hesitation to submit to other publications, Larson decided it was time to raise the stakes and made a trip to San Francisco.  He used all of his vacation time from his current job at the Humane Society and took his one and only portfolio to the San Francisco Chronicle.  He left his portfolio with them and quickly realized he didn't have another to take to other publications.  Day after day he called the receptionist at the San Francisco Chronicle in hopes that the cartoon editor had made a decision.

Towards the end of his short vacation, Larson paid an in-person visit with the intent of taking back his portfolio and leaving California as a failure.  By chance, while waiting by the receptionist, Larson was handed the phone.  On the other line was cartoon editor Stan Arnold, who had reviewed Larson's work.  Arnold asked, "Are you Gary Larson?".  When Larson confirmed, Arnold told him, "You're sick!".  After a short pause, Arnold continued by stating, "I love 'em!".  They met face-to-face and discussed syndication.  Arnold suggested a name change from Nature's Way to The Far Side.  Larson agreed without hesitation.  History was made on that fateful day.  Ironically, this happened a week before The Seattle Times dropped Nature’s Way.  Furthermore, Larson has stated that if he had been dropped a week earlier, he would have never pursued his dream. 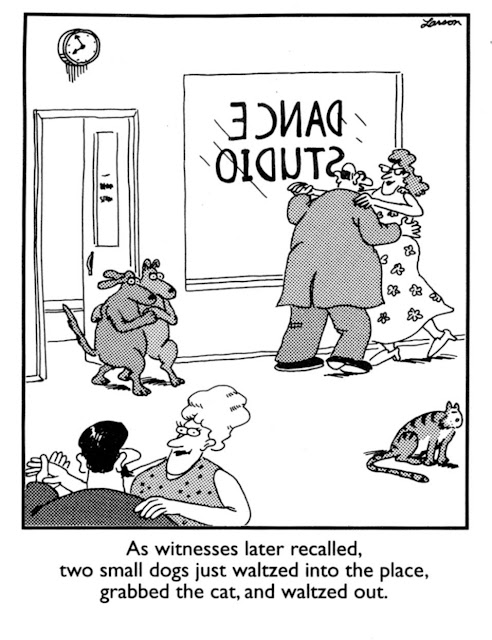 In 1989, The Pre-History of The Far Side: A 10th Anniversary Exhibit was published to highlight ten years of The Far Side.  Not only is it a great example of his work, but it's also one of the only resources that contains any biographical information on Larson.  To my amazement, no one has published an official (or, for that matter, an unofficial) biography.  The final third of the book contains a collection of Larson's work on The Far Side. But more interesting are the first two thirds, which contain a brief history of Larson's early career.  It also goes into the mostly negative reception of his comic strips and even includes letters from angry readers.  Most of these letters pin Larson as an animal-hating, unfunny man.  Nothing could be further from the truth, of course, since Larson has a intricate interest in animals, and for every comic where the animals are the butt of a joke, there are twice as many comics where the animal triumphs over a human.
In addition, these negative responses stem mostly from misinterpretations.  I admit there have been several of his comics that have left me baffled, but for the most part, when you "get" Larson's sense of humor, you "get" his gags.  In other words, the more you read, the more they make sense.

Throughout the book, Larson speaks humbly and self-deprecatingly about his "rise to fame".  Every page is a reminder of why his award-wining work has such a strong following.  It's a great insight to his thinking process and how a joke can come out of nowhere.

Larson's following is unquestionable.  Even those who may not know his name are sure to have seen some of his more popular comic strips.  The young boy pushing a "pull" door in front of the Midvale School for the Gifted has to be one of the most recognizable.  His drawings involving scientists behaving like children are also among many fan favorites.

Then there are the more obscure ones that most people simply "don't get".  But it's Larson's use of odd references that have become standard practice among the most popular television series (The Simpsons, Family Guy, Futurama, etc.).  The Simpsons have even featured Gary Larson on a couple of episodes. 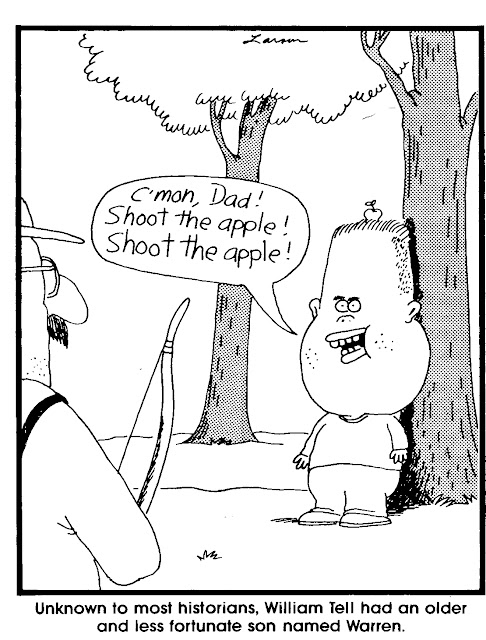 Although Larson retired The Far Side after only 15 years, his work remains recognizable around the world.  His works can be found in endless products (mugs, shirts, calendars, etc.) and in numerous The Far Side books (as of 2012, twenty-three have been published), which were all on the New York Times bestseller list. And outside of The Far Side, Larson has also published There's a Hair in My Dirt!: A Worm's Story (ISBN 0-06-093274-0), a short illustrated story about a worm.

Whether or not you're already a fan, The Far Side is still as hilarious and relevant today as it was back in the 80s and 90s.  Gary Larson, a genius cartoonist who almost wasn't, is certainly worthy of a 2nd look.

TRIVIA: In 1989, the Committee on Evolutionary Biology honored Larson by naming a Mallophaga (chewing lice species) after him.  This specific lice, belonging to the genus found only on owls, is named "Strigiphilus garylarsoni".
Posted by Jav Rivera at 6:00 PM