Given to me by one of my friends and fellow writers, the book Interpreter of Maladies was, hands down, one of the best gifts I got during the holiday season.  After reading the debut collection of short stories by author Jhumpa Lahiri, there’s no question in my mind that it is well-deserving of the prestigious awards it’s won (the Pulitzer Prize and the PEN/Hemingway Award among them). 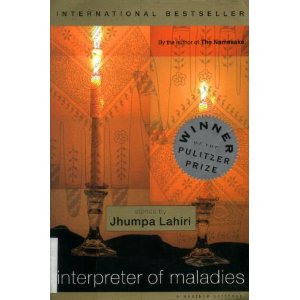 I can‘t recall if I started reading the book the same night that I got it.  I do know that once I opened the cover and delved in, I was hooked.  Many late nights in a row, like a parent to a insistent child, I promised myself “just one more story” before going to sleep.  Lahiri has one of the qualities that I envy as a writer; the ability to make each of her short stories so unique and able to stand alone that I never felt as if one was simply a continuation of the previous, even though there is a common theme of Indian nationality throughout the book.  The voice of the storyteller also shifts effortlessly amongst stories.  In the first of the volume, “A Temporary Matter“, the narration is modern and intimate; the reader is privy to the point of view of a husband as he and his wife come to the realization that their marriage has slowly disintegrated, intensified after they suffer a deep personal loss.  Further on in the book, “A Real Durwan” takes on a old world, folktale-like feeling, following a talkative older woman who spins some colorful yarns of her own.  Each piece of prose in the book is filled with rich conversation, imperfect (and thoroughly realistic) characters and minute details that add lushness to the settings and action of the stories.

To temper my envy of her superb storytelling, Lahiri has admitted to one of the truths of many great stories: they take time, and sometimes struggle, to craft.  In an interview with NPR, she explains that Interpreter of Maladies began after she spoke to an acquaintance about his job and the title popped into her head: “I felt a need to write this little phrase down, because I thought…it might make a nice title someday; I would look at it from time to time and try to write something, and I just, I really had no idea until about five years later, when the idea for the story came to me…”  She further explains that material for some of the other stories came from bits of her own experiences growing up amongst two cultures.

After enjoying this book so much, I’m on the hunt for Lahiri’s novel, The Namesake, and her second collection of short stories, Unaccustomed Earth.  Even if the other two are as good as the first, her debut is in no danger of being tossed into a yard sale or donation box though; it will definitely remain a favorite of mine, added to the stack by my bedside or nestled in a bookshelf.  I’m so glad that Ms. Lahiri’s characters still have more stories to tell.

(To listen to Jhumpa Lahiri talk about Interpreter of Maladies on NPR, visit: http://www.npr.org/templates/story/story.php?storyId=1057437)
Posted by 2nd First Look at 10:24 PM

Growing up in the 1980's in Wisconsin brought many fond memories.  One of those was watching "The Bozo Show".  Until recently, I thought Bozo was from Chicago (which is where this show aired).  Little did I know that the Chicago Bozo was just that...Bozo from Chicago.  There was also a Bozo from New York, a Bozo from Los Angeles, and even a Bozo from Thailand.  All said and done there were hundreds of Bozos around the globe.  Larry "Bozo" Harmon, however, was the one who made that happen.  He wasn't the first Bozo - there were different entities of Bozo - but he was the one that gave Bozo his look and characteristics.  He also franchised the character.

Before his death in 2008, Mr. Harmon wrote an autobiography (later released in 2010) entitled "The Man Behind The Nose: Assassins, Astronauts, Cannibals, and Other Stupendous Tales".  And may I state, I was more than intrigued by that title.  I saw that crazy red hair and recognizable face on the cover and immediately smiled.  I picked up the book and flipped through it.  I was looking for a new book but wasn't sure if this was the right one.  So I looked at the first chapter and based solely on the first paragraph I knew instantly that I needed to buy this book.  In fact, anyone pursuing a dream should quickly find this gem. 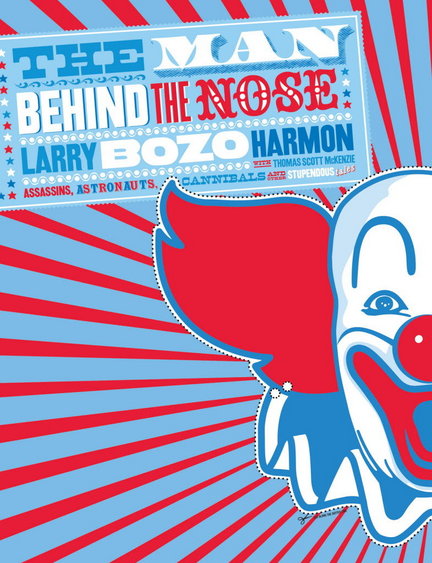 
"I've spent fifty-plus years talking to children.  And I've been lucky enough to meet hundreds of thousands of them years later as grown-ups.  Some have lived fantastic lives full of accomplishments, while others have gotten lost along the way.  And the difference between them is usually just one word.  That word is inspiration."

I was hooked and from beginning to end, the book keeps you motivated.  Mr. Harmon was certainly a determined man.  When people said he couldn't do something, he proved them wrong time and time again.  Even his silly dreams of becoming a drum major in high school was met with skepticism. But it didn't stop him from trying.

The book is also a fun read.  I was a little disappointed by how short it was but it makes each chapter that much more amazing.  I'm sure if Mr. Harmon had stayed alive longer he would have included more of his incredible tales.  After all, this isn't a man who does anything half-ass.  From his story about working at a dry cleaner to visiting the jungles of New Guinea where he was met with known cannibals, he did things all the way.  And he did it with a huge grin on his face - not just the one painted on.

On an aesthetic note, the artwork and fonts within each chapter are incredible.  And of course that cover just screams for attention.  It's a great thrill to have the exterior of the book be as wonderful as the content within.  I'd easily put this book in my top 3 biographies. 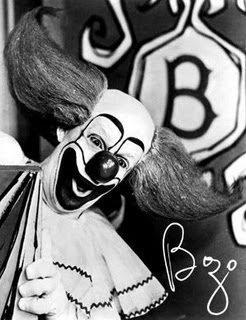 For more information about this book visit: bozotheclown.org

TRIVIA: Larry Harmon typically tapped his foot while on stage; a habit that goes back to his drumming days.
Posted by 2nd First Look at 3:07 AM