Thank you for visiting 2nd First Look! Check out our latest article on our Home page. And for more articles on film, television, music, literature, and the arts, click on the 2FL Articles button. Please leave comments on your favorite articles. And make sure to share our site with others!


In 1996, Stanley Tucci and Tony Shalhoub starred in Big Night - directed by Campbell Scott and Stanley Tucci.  That same year the Coen Brothers released Fargo and Anthony Minghella released The English Patient - two films that got major attention.  It's easy to see then why Big Night was lost in the shuffle.  Far from table scraps, however, this is certainly a seven-course film. 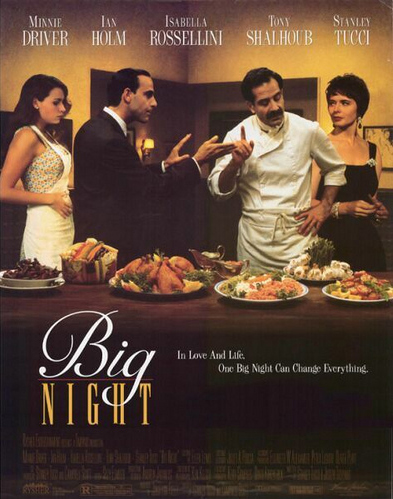 Big Night is the story of two brothers trying to run an Italian restaurant in the 1950's.  Tucci plays Secondo, a smooth operator with plans to fulfill the American dream. Shalhoub plays older brother Primo, a brilliant chef trying to keep the restaurant authentically Italian.  When Secondo seeks advice to neighboring restaurant owner Pascal (Ian Holm), Pascal pulls some strings to get famous jazz musician Louis Prima to visit their failing restaurant for one big night.

Tucci and Shalhoub work together like butter on warm bread.  It's not surprising that the two have worked together again (Shalhoub plays a role in Tucci's follow up film, The Impostors, and Tucci cameos on Shalhoub's "Monk" TV series). 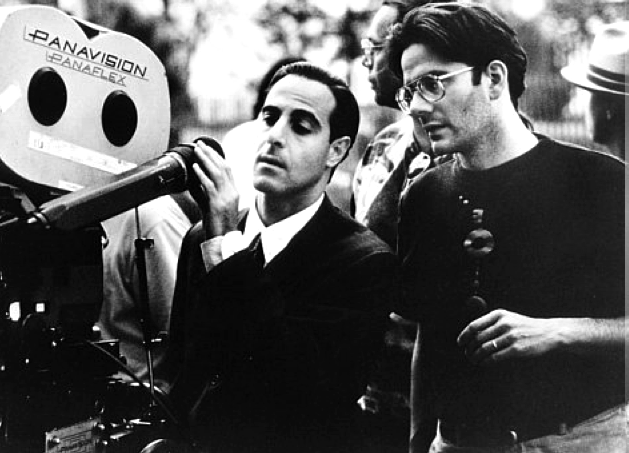 
The supporting cast is impeccable as well - several of whom were still in the early stages of their career.  You may have to do a double-take when you notice Marc Anthony, Liev Schreiber, and Allison Janney - all of whom have had great success in recent years but were relatively unknowns at the time.  There's also the established actors such as Ian Holm (Chariots of Fire, The Lord of the Rings), Isabella Rossellini (Fearless, Blue Velvet), and Minnie Driver (Good Will Hunting, Grosse Pointe Blank) rounding out the cast.

I'm not afraid to claim that Big Night also has one of the best endings.  It's a great example of the "show - don't tell" theory, which basically means let the body language and action explain a scene as opposed to using dialogue.  It's one take with little to no dialogue and no music.  It's simple, quiet and touching.  I won't say more so as not to ruin it for those of you who haven't seen it. 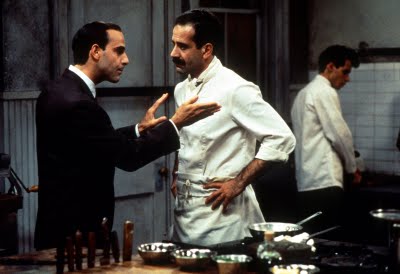 (Stanley Tucci, Tony Shalhoub, and Marc Anthony)
There's a lot to love about this film and I highly recommend it - I easily list it in my top 20 favorite films. For more information, visit their IMDb page here: www.imdb.com/title/tt0115678.  And to view their trailer, click on the following link: www.imdb.com/video/screenplay/vi1404698905/

Oh...just a side note: make sure not to watch this film if you're hungry otherwise you will be tortured.

I have at least two friends that I’d consider film aficionados, and some of the best and most compelling cinema that I’ve been introduced to has been through their suggestions.  Like many of us, I especially love work that challenges my thoughts or emotions in some way, or presents me with a viewpoint that I might not have considered before.  Call me a late bloomer, but I hadn’t really watched many foreign films until a year or so ago, when both friends started giving me more suggestions.  That was a slippery slope to start down though.  Now, spur-of-the-moment foreign film binges are one of my favorite things.  Give me a couple films and a free Friday or Saturday night, and I’m set. 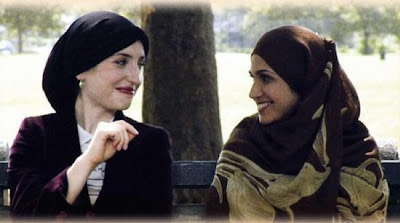 Sometime last year, I was at it again.  Among my selections for a weekend film night was 2007’s Arranged, from Film Movement.  This wasn’t a recommendation, but one I’d just happened to stumble upon while browsing at the video store.  The plot centers on two young teachers in a public school in Brooklyn.  Rochel, an Orthodox Jewish woman (played by Zoe Lister Jones), and her colleague Nasira, a Muslim (Francis Benhamou), face the challenges of being first-year teachers.  Their friendship really begins when a student asks a startling question about their religions during class.  As with many real-life friendships and, of course, movie plots, they soon discover that they have a lot in common, not only in the workplace but in their personal lives too.  Their bond is cemented when they find out that they’re both in the process of having marriages arranged for them.

I won’t go into too much detail because I don’t want to be a spoiler, but I can tell you what appealed to me most about this film.  First, and undoubtedly, the characters of Rochel and Nasira.  Both are young women in the midst of a balancing act.  They’re staying true to their respective religions and cultural traditions, but still pushing for some self-determination, wanting marriages that are on their own terms, as much as possible.  The film was filled with great lines from both characters.  It was interesting to see that juxtaposition of how they’re embracing tradition, yet are still modern in many ways, with sharp wits and a sense of independence.  Not being very familiar with either Islam or Orthodox Judaism, I’m not sure how accurately the religious practices and cultures were represented, but if (hopefully) the filmmakers did their research, that was one of the aspects I enjoyed too.  It allowed me a glimpse into religions and cultures that otherwise, I knew very little about. 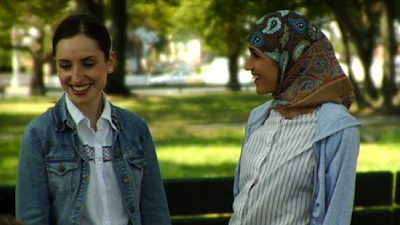 Don’t get me wrong: for the most part, this is a really upbeat film.  Most of the heavier issues are treated with a dose of humor, and the loose ends are tied up into a happy ending.  That said though, it still did for me all of the things that I want a film to do.  There was feeling, it made me think, and by the end, I felt like I’d been enlightened in some way.  Some big name video stores carry it, and it’s also on Netflix.  Pick it up or add it to your queue, and settle in for a light-hearted, but thoroughly entertaining, film.

I like my rock music.  My taste spans all styles of music but rock is at the very heart of me.  Rock can combine any other style of music and still make sense.  (And while we're on the subject, is there another instrument other than the violin that works in EVERY style of music?)  I digress - let's talk about Sam Roberts and his amazing rock band.

Sam Roberts had some slow starts with other bands before releasing his first album, Brother Down, in 1999 which he recorded at home (and was nominated for two Juno Awards).  An EP, The Inhuman Condition, soon followed which gained attention for its single "Brother Down" after it was re-released in 2002.  People started taking notice and in 2003, Roberts and his band released We Were Born In A Flame which won three Juno Awards (Album of the Year, Rock Album of the Year, and Artist of the Year). 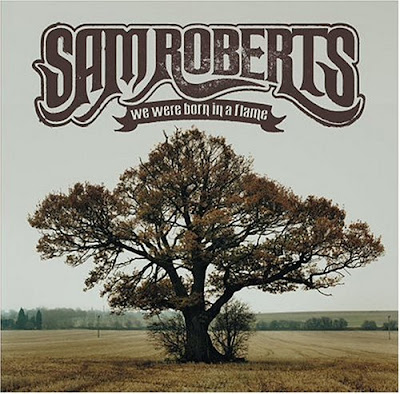 In 2006, they released Chemical City which was nominated for a Juno Award (Best Rock Album of the Year).  The video for their single, "Bridge To Nowhere", won a Juno Award for Video of the Year.  Their 2008 album, Love At The End Of The World, won Juno Awards for both Artist of the Year and Rock Album of the Year. These guys are clearly on a winning streak.  More importantly, their on a ball. Despite the attention they've gained in Canada, they still produce rock albums that would make any classic rock band proud.  There's no genre hybrids and no watering down - this is straight up rock.

Their single, "Them Kids" (from Love At The End Of The World) has one of the most clever videos.  The song questions modern music and the loss of rock in the airwaves.  The video showcases a family as SIMS characters and the change in times from rock-n-roll days to the digital age. 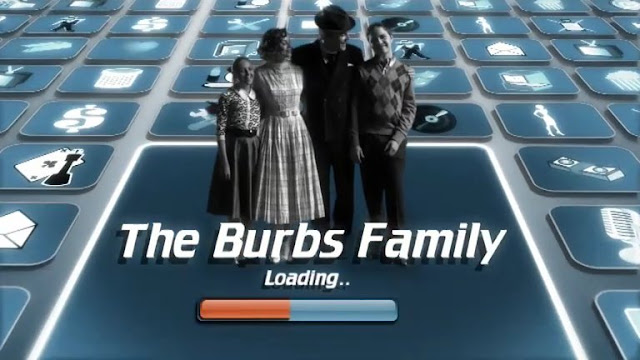 The Sam Roberts Band feels like a band with one mission: to make great rock tunes.  Even if you're not a rock fan, check out their video for "Them Kids" - it's just plain fun to watch.  Spread the word and keep an eye out for their forthcoming album - according to their website, they just finished  some recording sessions.  For more information on the band, check them out at their official website: www.samrobertsband.com.

Music Video for "Them Kids" directed by Dave Pawsey


And one quick question to you guys: what does "TD2ME SorG?" mean in text messaging lingo?  It's in the video and I can't find an answer!

TRIVIA: Their 2011 album "Collider" is the first time the band uses the moniker "Sam Roberts Band" as opposed to "Sam Roberts".
Posted by 2nd First Look at 7:11 PM 2 comments

Some might argue with my choice on this.  Yes, I know that Tim Burton is hardly an indie or little-known artist.  Having your name associated--often--with a certain Mr. Depp and the cult classic The Nightmare Before Christmas certainly negates the "little" before the word "known".  I'm going to insist that this charming little clip qualifies though. 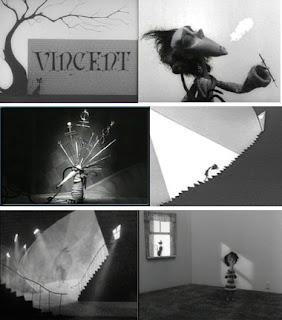 Vincent is a 1982 stop motion film short by Burton and Rick Heinrichs.  It follows an imaginative little boy whose ambition is to be "just like Vincent Price".  The fact that Vincent Price himself actually narrates is sheer perfection.  The opening sequence is sparse and backed by soft, melancholy flute music, setting the mood for the rest of the not-quite-six-minute film.  Like many of the creepy, sometimes campy, horror flicks of yore, Vincent is in only black and white.  There are a few moments where (like most Burton films) you have to practice suspended disbelief.  Vincent is seven, but reads Edgar Allen Poe, and paints a portrait like a master artist.  Still, like most things Burton, the journey you're taken on is well worth playing along.  Seeing how elements of this film have continued into his later work is fun too.  If you're familiar with them, you'll definitely pick up on things that are Corpse Bride and Nightmare-esque. 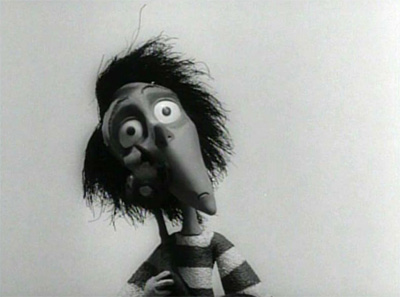 I'm sure it's no secret by now: I'm a big Burton fan.  However...I'd venture to guess that the appeal of Vincent will go beyond the large circle of die-hard devotees.  Anyone who felt misunderstood as a child (which I imagine is just about anyone walking planet Earth at the moment) can see a glimmer of themselves here.  Any parent who has a child who treats their world of make-believe as reality will understand.  Any adult who needs just a few minutes of escape and make believe again should find it time well spent.  Go ahead--take a break.  Reality will always be there when you get back.